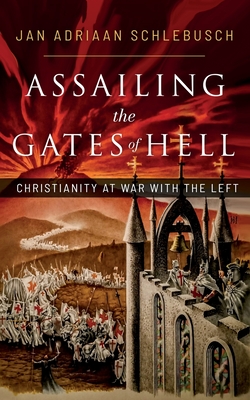 Assailing the Gates of Hell addresses the central threat Christianity currently faces. Leftists, particularly Cultural Marxists, have spent the better part of the past century successfully infiltrating every major institution in the West-with the chief aim of subverting and ultimately destroying Christianity. By means of government agencies, public schools and universities, media and entertainment, and even the churches, the enemies of Christ have dedicated all their resources to this onslaught on Christ's Kingdom. They undermine Christian morality and doctrine for the purpose of destroying the family unit, erasing our history, and training up our children as soldiers for their cause of establishing an anti-Christ hegemony on earth. Yet like all the enemies of the Lord and King of the universe, Jesus Christ, this adversary too shall fade into oblivion. While the Cultural Marxists have largely succeeded in completing their "long march through the institutions," their strategy is short-sighted compared to the sovereign plan of Almighty God. Their current success will ultimately prove to be a blip on the radar in the grand scheme of history. King Jesus will conquer all, and He will use His church to accomplish this victory. Now is not the time for passivity. Now is the time to actively fight the forces of darkness and lay the foundations for the coming victory of Christ.