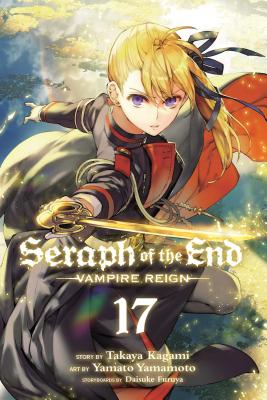 In a post-apocalyptic world of vampires vs. humans, Yuichiro brings vengeance upon his vampire overlords!

After trumpets of the apocalypse proclaim the fall of humanity, vampires arise from the shadows to rule the earth. Yuichiro wants just one thing—to get revenge by killing each and every vampire.

Now that Ferid’s been rescued, Yuichiro and the gang regroup at Guren’s childhood home. There, Guren reveals a terrible secret—the angel that was summoned with the original apocalypse is trapped inside, and Yuichiro and his friends must work together to defeat it! Meanwhile, Krul is taken to Second Progenitor Urd Geales, the current leader of the vampires. While there, she reveals some old secrets of her own…

Takaya Kagami is a prolific light novelist whose works include the action and fantasy series The Legend of the Legendary Heroes, which has been adapted into manga, anime and a video game. His previous series, A Dark Rabbit Has Seven Lives, also spawned a manga and anime series.