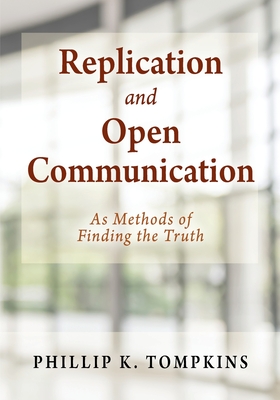 Replication and Open Communication As Methods of Finding the Truth combines academic research with significant real world experiences that will surprise and amaze. In this book you will follow Dr. Tompkins' first-person narrative of moving from a failed replication of an experiment in a chemistry lab to his investigative work as he attempted to replicate the facts of Truman Capote in his "non-fiction novel" In Cold Blood. This search for replication resulted in Dr. Tompkins' article in Esquire Magazine titled In Cold Fact, which presented a detailed counter narrative of many of the facts in Capote's book.

Replication and Open Communication as Methods of Finding The Truth continues with Dr. Tompkins work investigating and reporting on the causes of the Kent State Massacre. Hint: the lack of open communication played a major role.

Dr. Tompkins describes his work as a consultant to Werhner Von Braun during the R& D phase of NASA's Moon Rocket Project where the principles of open communication and replication were significant to its success; and their lack in later space flights where Von Braun was not involved led to the tragedies of the Challenger and Columbia disasters.

Dr. Tompkins' research and real world experiences described throughout this book found that replication and open communication, when combined, produced desired outcomes, including the truth. And the lack of them could produce disaster.

All of this leads to Dr. Tompkins applying the methods of replication and open communication to other topics, such as second opinions in medicine, before reporting a stunning climactic discovery, the independent confirmation of findings dating to the 17th century when chemistry, i.e. science, was able to emerge out of the dark chaos of alchemy.

Dr. Tompkins is the former editor of Communication Monographs, Past President and Fellow of the International Communication Association, and author of six books, two of which draw on his 22 years of experience as a volunteer at the St. Francis Center, a large day shelter for homeless "guests" in Denver, Colorado.