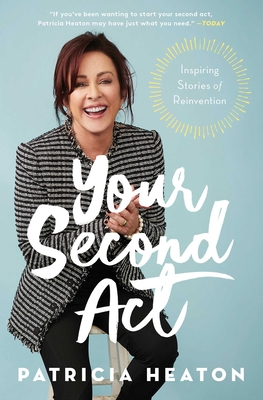 By Patricia Heaton
$17.00
On Our Shelves Now

An entertaining book “filled with inspirational anecdotes” (People) about second acts in life and reinventing yourself from beloved television actress Patricia Heaton—Emmy Award–winning star of Everybody Love’s Raymond, The Middle, Patricia Heaton Parties, and most recently, Carol’s Second Act.

Patricia Heaton is one of TV’s most recognizable and beloved moms.

She’s won three Emmys, two for her starring role as Debra Barone on the long-running comedy Everybody Loves Raymond, and followed that career-making role with another gem as Frances Heck on the popular sitcom The Middle. She returned to television as the lead in the series Carol’s Second Act, which followed divorced fifty-year-old Carol Kenney (played by Heaton), who after raising two children and retiring as a teacher decides to finally pursue her dream of becoming a doctor.

Patricia Heaton knows what it’s like to stage a second act and navigate pivotal transitions in life. When Heaton’s children left the nest, she found herself in a new and unfamiliar stage of life, compelling her to evaluate which direction to take next. Heaton discovered she had the time pursue passions that were previously placed on hold, both personally and professionally. She made her move and took a step forward in her career and for the first time, Heaton was not only the star of her own show, but also the executive producer. She now finds her greatest fulfillment in using her influence to support humanitarian efforts as a Celebrity Ambassador for World Vision, the world’s largest non-governmental organization. She and her husband support their work in poverty relief around the globe, something that was planted in her heart long ago.

Through her own experience, Heaton became curious about other people’s stories of second-act transitions and ways to offer support in the process. Now, in Your Second Act, she shares wisdom from her own personal journey as well as insight from stories of numerous people across the country. From work to health, to love and more, the results are heartwarming, inspiring, and surprisingly relatable.

“If you’ve been wanting to start your second act, Patricia Heaton may have just what you need” (Today). Filled with light-hearted anecdotes and pragmatic steps, Heaton shows us that midlife doesn’t have to be about crisis when you focus on the opportunity. After all, it’s never too late, or too early to stage your second act.

Patricia Heaton is an Emmy Award–winning actress who has played two beloved TV moms on the long-running sitcoms Everybody Loves Raymond and The Middle. She currently plays the lead in the CBS comedy Carol’s Second Act. In 2001, Heaton cofounded FourBoys Films, a production company which she runs with her husband David Hunt. Heaton recently launched her homewares line “Patricia Heaton Home” with Walmart. Born out of her love for spending quality time with family and friends, this delightful and charming product line was a natural next step after her Emmy Award-winning Food Network series Patricia Heaton Parties and her first cookbook, Patricia Heaton’s Food for Family and Friends. A committed philanthropist, Heaton is the founding member of World Vision’s Celebrity Ambassador Network. She is the author of Your Second Act, and lives in Los Angeles with her husband.

"The timing could not be more perfect for a title like this."
— Good Morning America

“Filled with inspirational anecdotes drawn from Heaton’s personal experiences (from building her career to love and surviving an empty nest) and the experiences of other people who are pursuing their dreams.”
— People

"If you’ve been wanting to start your second act, Patricia Heaton may have just what you need.”
— The Today Show

“After starring in two beloved  sitcoms, Everybody Loves Raymond and The Middle, Patricia Heaton started soul searching for what’s next in her life. And she shares what she found in her new book, You Second Act…this book is going to be helpful.”
— The View

“Patrica Heaton wants to help usher people in their ‘Second Act.’ In fact, the actress has written a book to do just that.”
— USA TODAY

“I love this because I’m approaching that. I talk about it all the time with my girlfriends. What is our next chapter? What does the back nine look like?...I love your back nine right now."
— Kit Hoover, Access Hollywood

“It’s never too late to try something new. That’s what Patricia Heaton will tell you. Heaton’s recent experiences spurred her to write Your Second Act, a collection of profiles about women, including herself, who have reinvented themselves.”
— Parade

“There’s no wrong way to live your second act. And a new book by Emmy Award-winning actress Patricia Heaton is helping readers set the stage for it. Filled with true accounts of people who transformed themselves mid-life – in sometimes-jaw-dropping ways – Heaton hopes readers of “Your Second Act: Inspiring Stories of Reinvention” will not only find motivation but also practical steps to start their own process of discovery. And there’s certainly no shortage of inspirational accounts [here].”—
— The Boca Raton Observer