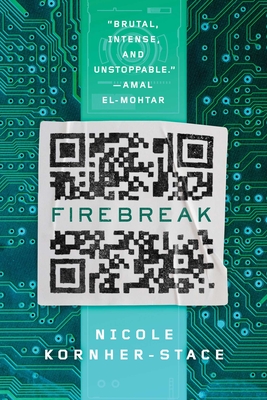 One young woman faces down an all-powerful corporation in this all-too-near future science fiction debut that reads like a refreshing take on Ready Player One, with a heavy dose of Black Mirror.

Ready Player One meets Cyberpunk 2077 in this eerily familiar future.

“Twenty minutes to power curfew, and my kill counter’s stalled at eight hundred eighty-seven while I’ve been standing here like an idiot. My health bar is flashing ominously, but I’m down to four heal patches, and I have to be smart.”

Two corporations have replaced the US, splitting the country’s remaining forty-five states (five have been submerged under the ocean) between them: Stellaxis Innovations and Greenleaf. There are nine supercities within the continental US, and New Liberty City is the only amalgamated city split between the two megacorps, and thus at a perpetual state of civil war as the feeds broadcast the atrocities committed by each side.

Here, Mallory streams Stellaxis’s wargame SecOps on BestLife, spending more time jacked in than in the world just to eke out a hardscrabble living from tips. When a chance encounter with one of the game’s rare super-soldiers leads to a side job for Mal—looking to link an actual missing girl to one of the SecOps characters. Mal’s sudden burst in online fame rivals her deepening fear of what she is uncovering about BestLife’s developer, and puts her in the kind of danger she’s only experienced through her avatar.

Author Kornher-Stace’s adult science fiction debut—Firebreak— is loaded with ambitious challenges and a city to save.

Nicole Kornher-Stace is the author of the Norton Award finalist Archivist Wasp and its sequel, Latchkey. Her short fiction has appeared in Clarkesworld, Apex, and Fantasy Magazine, as well as many anthologies. She lives in New Paltz, New York, with her family. She can be found online at NicoleKornherStace.com, or on Twitter @WireWalking.

“Firebreak is a simmering scream, a pot bucking on a stove after all the water's boiled away. It's a fight song in praise of fierce friendship and the strength to endure.” —Amal El-Mohtar, Hugo and Nebula award-winning author of This is How You Lose the Time War

Firebreak is a klaxon sounding at midnight. It is a howl and a wake-up call. It is a fire that does what literary fires do best: spits rage, radiates the warmth of compassion, and fans the flame of revolution. —C. S. E. Cooney, World Fantasy Award-winning author of Bone Swans: Stories

“A steadfast heroine stands up against a tyrannical corporation in this vivid work of dystopian sci-fi…. The effortlessly detailed worldbuilding is captivating. Kornher-Stace leads readers through the cinematic landscape of her imagined future with an expert hand.” —Publisher's Weekly

"Modestly, quietly profound… A resonant tale of erasure and absence—and an aching reminder that regaining what has been lost isn't always the answer.” —NPR, Archivist Wasp