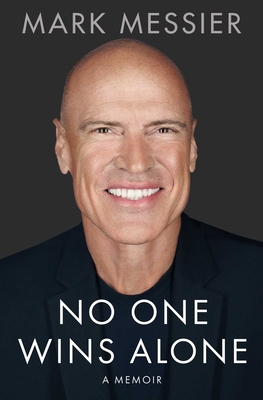 The legendary Hall of Fame hockey player and six-time Stanley Cup champion tells his complete story for the first time, sharing the lessons about leadership and teamwork that defined his career, in this “inspirational memoir that transcends sports” (David Grann, #1 New York Times bestselling author).

Mark Messier is one of the most accomplished athletes in the history of professional sports. He was a fierce competitor with a well-earned reputation as a winner. But few people know his real story, not only of the astonishing journey he took to making NHL history, but of the deep understanding of leadership and respect for the power of teamwork he gained.

Messier tells of his early years with his tight-knit family, learning especially from his father, Doug—a hockey player, coach, and teacher. He describes what it was like entering the NHL as a teenager with a wild side, and growing close with teammates Wayne Gretzky, Kevin Lowe, Paul Coffey, Glenn Anderson, and others during their high-flying dynasty years with the Edmonton Oilers. He chronicles summers spent looking for inspiration and renewed energy on trips to exotic destinations around the world. And he recounts the highs, lows, and hard work that brought the New York Rangers to the ultimate moment for a hockey club: lifting the Stanley Cup.

Throughout, Messier shares insights about success, winning cultures, and how leaders can help teams overcome challenges. Told with heart and sincerity, No One Wins Alone “is about much more than just hockey. It has lessons anyone can use—be it in sports, business, or life” (Jack Nicklaus, PGA Major Championship winner and author of My Golden Lessons).

Mark Messier is a former professional hockey player from Alberta, Canada. He played in the NHL for twenty-five years, won six Stanley Cups—five with the Oilers and one with the Rangers—and is the only player to have captained two NHL franchises to championships. He is second on the all-time career lists for playoff points, and third for regular season games played and for regular season points. In 2007 he was inducted into the Hockey Hall of Fame, in his first year of eligibility. That same year, the NHL instituted the Mark Messier Leadership Award, given annually to the player who exemplifies great leadership qualities to his team, on and off the ice. Mark lives in New York.

Jimmy Roberts has worked in sports and news journalism for four decades at ABC, ESPN, and NBC, where he has been the recipient of thirteen Emmy Awards. He is also the author of Breaking the Slump.

“It’s a rare delight to read a sports memoir that’s so well-written and so substantial. Messier is way more than just a hockey legend and a great leader — he’s a mensch, a keen observer of what makes people tick and how he can make every one of them tick a bit better. His generosity of spirit is at least as large as his talent, and I’d especially recommend No One Wins Alone for people who aren’t hockey fans. Otherwise, they’ll never know what they're missing.”
— Stephen J. Dubner, #1 New York Times bestselling author of Freakonomics

“Mark Messier isn’t just one of the greatest hockey players ever—he’s also a keen observer of leadership and teamwork dynamics. This book is filled with insights about building cultures of excellence that will come in handy even if you’re not a sports fan.”
—Adam Grant, #1 New York Times bestselling author of Think Again and host of the TED podcast WorkLife

“An inspirational memoir that transcends sports.”
—David Grann, #1 New York Times bestselling author of Killers of the Flower Moon and The Lost City of Z

“I've always been fascinated by what makes up a champion, and No One Wins Alone is a window into the mind of one of the greatest hockey players and leaders of all time. It speaks to something I’ve always felt is essential for success: a winning mentality. This book is about much more than just hockey. It has lessons anyone can use—be it in sports, business, or life.”
—Jack Nicklaus, 18-time PGA Major Championship winner, and author of My Story, Golf My Way, and My Golden Lessons

“It’s a sports book, it’s a memoir, it’s also about leadership, and Messier was smart enough because he’s a team player to let Jimmy Roberts help him write it, one of our great sports journalists . . . perfect for anyone who is a Rangers fan, or a sports fan, or wants to learn a little bit more about teammates and leadership.”
—Harlan Coben, #1 New York Times bestselling author, on The Today Show

“Mark Messier is the personification of what great leadership is all about. This book is chock full of insights that show the power of always being in search of new ways to improve and grow, no matter how accomplished you might be. Read this and you’ll know why the National Hockey League created the Mark Messier Leadership Award.”
—David Novak, #1 New York Times bestselling author of Taking People With You, Host of the How Leaders Lead podcast, and Co-founder, Former Chairman and CEO of Yum! Brands

“No One Wins Alone is about more than just what went down on the ice and in the dressing room. Yes, you will learn about what made other gladiators follow Mark onto the ice, and how he brought out the best in his teammates and how they brought out the best in him. But you will also learn about how a kid from St. Albert, Ontario, became one of the best leaders in sports. Twenty pages in, I was taking notes on some of the things Mark had written to try out in my own life.”
—Ken Reid, Sportsnet Central Anchor and bestselling author of Hockey Card Stories

“No One Wins Alone is as much about teamwork and leadership as it is about hockey . . . . [it’s] about bright lights and late nights and hard life lessons. It is about inclusion and teamwork, and it is written with sensitivity and humor."
—The Globe and Mail

“No One Wins Alone is a wonderful book—brilliantly insightful, beautifully written, filled with powerful examples of effective leadership from one of the greatest leaders of our time. Mark Messier brings leadership to life and shows through vivid and often unforgettable examples how to build a powerful, positive, sustaining culture, and how to inspire others. I recommend this book to everyone who is a leader or aspires to be one and to all of us who are members of teams.”
—Brad Karp, Chairman of Paul, Weiss, Rifkind, Wharton & Garrison