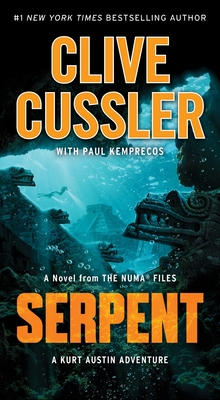 When Kurt Austin, the leader of a courageous National Underwater and Marine Agency exploration team, rescues beautiful marine archaeologist Nina Kirov off the cost of Morocco, he becomes the next target of Texas industrialist Don Halcon. A madman bent on carving a new nation out of the southwestern United States and Mexico, Halcon’s scheme hinges on Nina’s recent discovery involving Christopher Columbus and a priceless pre-Columbian antiquity buried in the battered remains of the sunken Italian luxury line Andrea Doria. Only Kurt Austin and his NUMA team stand between Halcon and the Andrea Doria’s silent steel hull—and if their deadly mission fails, Halcon will ride to power on a wave of death and destruction.

Clive Cussler (1931–2020) was the author or coauthor of over eighty books in five bestselling series, including DIRK PITT®, THE NUMA FILES®, THE OREGON FILES ®, AN ISAAC BELL ADVENTURE ®, A SAM AND REMI FARGO ADVENTURE ®, and A KURT AUSTIN ADVENTURE ®. His nonfiction works include Built for Adventure: The Classic Automobiles of Clive Cussler and Dirk Pitt, and Built to Thrill: More Classic Automobiles from Clive Cussler and Dirk Pitt, The Sea Hunters and The Sea Hunters II; these describe the true adventures of the real NUMA, which, led by Cussler, searches for lost ships of historic significance. With his crew of volunteers, Cussler discovered more than sixty ships, including the long-lost Civil War submarine Hunley.

"Clive Cussler has created a new bunch of NUMA supersleuths and they infuse his work...a jolt of energy." – The Denver Post

"Cussler is a master of building suspense and tension." – Richmond Times-Dispatch

“As always, Cussler twists fact and fiction into a rope of tension that will leave you dangling until the last page.” —Tulsa World (OK)

“Endless excitement, nonstop action, and quite a degree of entertainment. . . . The characters add to the overall fun. . . . A pleasurable thriller that will entice fans of ac- tion tales to want many more novels from the NUMA files.” —Midwest Book Review