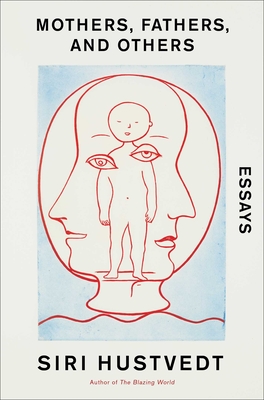 Feminist philosophy meets family memoir in this “profound” (Publishers Weekly, starred review) new essay collection from Siri Hustvedt, an exploration of the shifting borders that define human experience, including boundaries we usually take for granted—between ourselves and others, nature and nurture, viewer and artwork—which turn out to be far less stable than we imagine.

Described as “a 21st-century Virginia Woolf” in the Literary Review (UK), Man Booker longlisted Hustvedt displays her expansive intellect and interdisciplinary knowledge in this collection that moves effortlessly between stories of her mother, grandmother, and daughter to artistic mothers, Jane Austen, Emily Brontë, and Lousie Bourgeois, to the broader meanings of maternal in a culture shaped by misogyny and fantasies of paternal authority. Mothers, Fathers, and Others is a polymath’s journey into urgent questions about familial love and hate, human prejudice and cruelty, and the transformative power of art.

This moving, fierce, and often funny book is finally about the fact that being alive means being in states of constant, dynamic exchange with what is around us, and that the impulse to draw hard and fast conceptual borders where none exist carries serious theoretical and political dangers.

Siri Hustvedt, a novelist and scholar, has a PhD in English literature and is a lecturer in psychiatry at Weill Cornell Medical College. She is the author of a book of poems, seven novels, four collections of essays, and two works of nonfiction. She has published papers in various academic and scientific journals and is the recipient of numerous awards, including the prestigious Princess of Asturias Award for Literature, the European Charles Veillon Essay Prize, an American Academy of the Arts and Letters Award in Literature, and the Los Angeles Times Book Prize for Fiction for The Blazing World, which was also longlisted for the Man Booker Prize. She lives in Brooklyn, New York.

“Hustvedt’s insatiable curiosity and deep immersion in many disciplines — literature, philosophy, history, anthropology, art criticism, political theory, psychiatry, neuroscience, embryology, and epigenetics — shine through each of the 20 essays in her latest book…. Hustvedt’s keen intellect is evident on every page of this stunning collection, proving herself an authority worthy of attention.”—Washington Independent Review of Books

“In this latest collection Siri Hustvedt demonstrates her tremendous range as an essayist.”—Chicago Review of Books

“This new collection draws on Hustvedt’s ancestors, both literary and familial. She touches on her intellectual forebears, ruminates on the allure of mentorship and perhaps above all, wrestles with the peculiarities of motherhood.”—New York Times Review of Books

“Engrossing…. Mothers, Fathers, and Others makes a fascinating companion to Motherhood: A Manifesto, Eliane Glaser's recent book about the pernicious cult of the perfect mother. The two books brilliantly capture the joy and pain of motherhood: elation and depression, wonder and weariness, love and hate for the offspring. They introduce you to the reality of motherhood and make a strong case about child rearing as a shared responsibility of couples and society at large. Read them.”—NPR

"Memoir, psychoanalysis, feminist theory and literary criticism combine in a thoughtful essay collection that observes motherhood from every angle."—The Guardian

“Hustvedt is a transporting storyteller…a mind-revving investigative thinker and a commanding essayist who stirs the waters, overturns stones, opens curtains, and lifts veils with authority, refinement, and cogency.”—Booklist (starred review)

“Another outstanding compilation of essays from Hustvedt…Brilliant and utterly transfixing."—Kirkus (starred review)

"Profound.... Hustvedt pulls from psychoanalysis, philosophy, literature, and art criticism to make brilliant connections among her takes on the world. Fans of Hustvedt’s work will welcome this, and those less familiar will delight in discovering her witty, lavish style."—Publishers Weekly (starred review)

"Offering no easy answers but a myriad of moving insights, this collection of 20 essays delves into the shifting boundaries between oneself and others.”—Shelf Awareness (starred review)