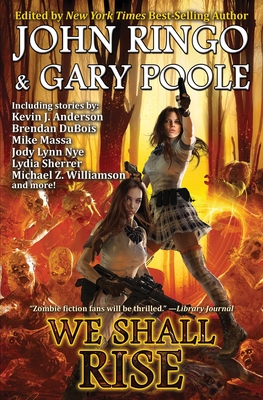 The world has been brought to its knees by the “zombie virus.” Nations have fallen, cities have been overrun by the infected, and the human race has come perilously close to extinction. But with the first winter come and gone, the infected have been reduced to not much more than a background nuisance, and survivors around the world are taking stock and vowing to rebuild and rise up stronger, better, and unafraid.

About Black Tide Rising:
“. . . an entertaining batch of . . . action-packed tales. Certainly, fans of Ringo’s particular brand of action-adventure will be pleased.”—Booklist

“This anthology broadens Ringo’s  Black Tide world, serving up doses of humanity amid the ravenous afflicted. Comedy has a place in this harsh reality, and these stories stir adventure and emotion at a frantic clip throughout. Zombie fiction fans will be thrilled.”—Library Journal

About the Black Tide Rising Series:
“Not only has Ringo found a mostly unexplored corner of the zombie landscape, he's using the zombie frame to tackle a broader theme: the collapse and rebirth of civilization. The zombie scenes are exciting, sure, but its the human story that keeps us involved. A fine series.”—Booklist

About Under a Graveyard Sky:
“Ringo combines humor and horror in this strong series debut, the thinking reader’s zombie novel.”—Publishers Weekly

About John Ringo:
“[Ringo’s work is] peopled with three-dimensional characters and spiced with personal drama as well as tactical finesse.”—Library Journal

“. . . practically impossible not to read in one sitting . . . exceedingly impressive . . . executed with skill, verve, and wit.”—Booklist

BLACK TIDE RISING SERIES:
Under a Graveyard Sky
To Sail a Darkling Sea
Islands of Rage and Hope
Strands of Sorrow
Black Tide Rising
Voices of the Fall
We Shall Rise
At the End of the World
At the End of the Journey
The Valley of Shadows
River of Night

John Ringo is the New York Times best-selling author of the Black Tide Rising series, the Posleen War series, the Through the Looking Glass series, and more, including the Troy Rising series, of which Live Free or Die is the first installment. A veteran of the 82nd Airborne, Ringo brings firsthand knowledge of military operations to his fiction.

Gary Poole has worked in the entertainment and publishing industry for his entire adult life. He's worked directly with John Ringo on more than a dozen novels and has adapted several of them into screenplays (all of which remain in development). When not working with Ringo, Poole is the managing editor of a successful alternative newsweekly in Tennessee. He spent years on the radio as a talk show host and is an award-winning broadcast journalist.