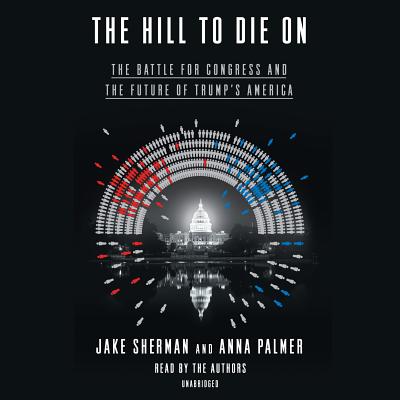 NEW YORK TIMES BESTSELLER • The inside story of Donald Trump’s first two years in Washington as viewed from Capitol Hill, a startling account that turns “Congress into a Game of Thrones book” (Trevor Noah, The Daily Show).

Taking readers into secret strategy calls and closed-door meetings from the House to the White House, Politico Playbook writers Jake Sherman and Anna Palmer trace the gamesmanship and the impulsiveness, the dealmaking and the backstabbing, in a blow-by-blow account of the power struggle that roiled Congress.

Moving from the fights for advantage between Donald Trump, Nancy Pelosi, and Chuck Schumer; to Mitch McConnell’s merciless, Machiavellian handling of the sexual assault accusations against Supreme Court nominee Brett Kavanaugh; to Paul Ryan’s desperate, failed attempts to keep Mark Meadows from pushing Trump into a government shutdown over immigration, The Hill to Die On bristles with fresh news and tells the story of what really happened in some of the most defining moments our era.

Like The West Wing for Congress, or Shattered meets This Town, The Hill to Die On tells an unforgettable story of politics and power, where the stakes going forward are nothing less than the future of America and the lives of millions of ordinary Americans.

Praise for The Hill to Die On

“[Sherman and Palmer] go deep inside the halls of Congress to document the deal making, backstabbing, power struggles and political knife fights that have roiled the nation’s capital during President Donald Trump’s first two years in office. . . . Anything but boring.”—USA Today, “5 Books Not to Miss”

“[The Hill to Die On] painstakingly chronicles the return to divided government and the restoration of an institutional check on a mercurial chief executive. . . . The book depicts a foul-mouthed president in love with his own reflection, a House GOP encased in the amber of self-delusion, and Nancy Pelosi’s unblinking focus on twin prizes: recapturing the House and returning to the speaker’s chair.”—The Guardian

“If you are one of the many Americans who hates Congress, this book is for you. In the Washington depicted in Jake Sherman and Anna Palmer’s new book, there are no heroes—only winners and losers. . . . With these lawmakers, Sherman and Palmer get inside their heads and capture what they’re thinking in real time.”—The Washington Post

JAKE SHERMAN and ANNA PALMER are senior writers for Politico, and the co-authors of the Politico Playbook. A graduate of the George Washington University and Columbia University, Sherman has also worked at the Wall Street Journal. Palmer was previously a co-author of the Politico Influence and a writer for Roll Call and Legal Times.
My Account • Sign In • Sign Out • Register
NEW & USED BOOKS
AUTHOR EVENTS • GIFTS
Tempe
6428 South McClintock Drive
480.730.0205
[Google Map]
Sunday-Friday 10am-8pm
Saturday 9am-8pm
Trade Counter 11am-6pm daily