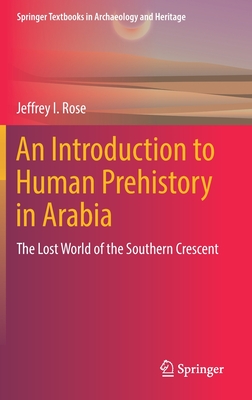 This textbook explores the mystery of human origins in the Arabian Peninsula, the lost Southern Crescent where humanity took its first steps toward civilization. Under Arabia's surface of sand and stone lies a primordial realm of rolling grasslands, freshwater lakes, and river floodplains. This book aims to restore a critical missing chapter in the prehistory of our species that played out in this forgotten place of plenty.

The author has carried out more than twenty years of fieldwork in Yemen and Oman, weaving his research together into an unorthodox tapestry of archaeology, environmental science, genetics, and Middle Eastern mythology. This volume peers beneath Arabia's abandoned deserts, revealing a land that once served as a bridge between prehistoric worlds. This textbook is suitable for undergraduate and graduate students as well as all readers who are interested in learning about Arabian prehistory.

Dr. Jeff Rose specializes in the prehistory of the Arabian Peninsula. His areas of interest touch upon a variety of subjects including modern human origins, the Neolithic Revolution, stone tool technology, archaeogenetics, geoarchaeology, and Middle Eastern folklore and oral traditions. He received a PhD in Anthropology from Southern Methodist University in 2006 and is currently a research scholar at the Ronin Institute. In 2012, Jeff was presented with the lifetime achievement award of National Geographic Explorer. He also works as a science and religion communicator in broadcast media, presenting documentary series for BBC, National Geographic, and other major channels.