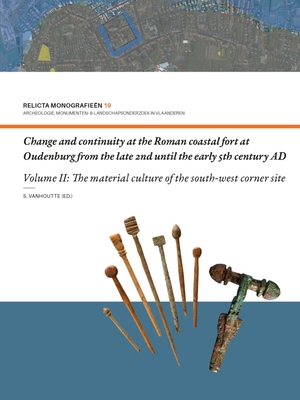 By Sofie Vanhoutte (Editor)
Email or call for price

In the later Roman period the North Sea and Channel region was the scene of seaborn attacks, political crises, army reforms, Germanic invasions and changing imperial defense strategies. Literary evidence for this era is poor. On the other hand the Shore forts can yield highly significant information, but have been subject to little study in recent decades. At the Belgian coastal fort at Oudenburg large-scale excavations in the first decade of the 21st century revealed a strikingly well-preserved chronological, spatial and functional evolution of this military base, with five main fort periods running from the late 2nd until the early 5th century AD. For the first time within the context of the Shore forts securely datable structural evidence demonstrates the stages in progression of a mid- to late Roman fort where the horizons can be related to historically recorded processes and events in the region. Political, economic and social developments can be seen within this evidence, as a result of the assessment of the huge quantity of well-stratified finds types. Reports on the finds assemblage by specialist experts, using various analytical methods, represent 'touchstones' for regional military and later Roman studies in the North-West provinces.

The study of Oudenburg, and in relationship to other Shore forts, enables exploration of 'change and continuity' and 'identity', in respect of the everyday lives of soldiers, and in their interaction with other forts and wider regional spheres. This is achieved by examining find contexts as reflections of the socio-cultural world. The study of 'military identities' is further emphasized through looking at the associated graveyards wherein the direct relationship with the successive fort periods is established. It is clear this fort was closely connected with the British forts and that there occurred an increasing Germanic influence as the fort transformed into a community of military families.

This is volume two of three and provides detailed reports on the finds assemblage of the south-west corner site of the Oudenburg fort.