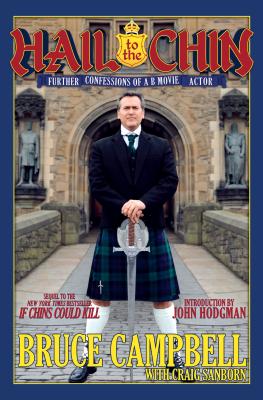 Changing Hands Bookstore and Phoenix Comicon are proud to welcome actor, director, writer, and producer Bruce Campbell to the Valley with Hail to the Chin, the long-awaited sequel to If Chins Could Kill.

BONUS! All attendees can participate in Last Fan Standing, the ultimate test of pop-culture knowledge hosted live onstage by Bruce himself.


TICKET PACKAGES → VIP Package ($66) [SOLD OUT] One (1) hardcover copy of Hail to the Chin, admission for one (1) person, and one (1) entrance to the post-event VIP-only meet and greet with Bruce Campbell. Includes an exclusive Hail to the Chief lanyard. Limited VIP spots available.
→ Regular Admission Package ($42) One (1) signed hardcover copy of Hail to the Chin and admission for one (1) person. Books will be pre-signed. There will be no public meet-and-greet for regular admission ticket-holders. Fans wanting to meet Mr. Campbell must purchase a VIP package.
→ Add On Ticket ($12) Admission for one (1) person. This can only be purchased in combination with the VIP Package or Regular Admission Packages. Limit one extra seat per package. **This ticket is good for admission to the event, not to the post-event meet and greet.**
EVENT GUIDELINES PLEASE NOTE
CAN'T MAKE IT? Call 480.730.0205 and sign up for our wait-list to see if signed books are available after the event.

ABOUT THE BOOK
It's been 15 years since his first memoir but Bruce is still living the dream as a "B" movie king in an "A" movie world. Bruce Campbell makes his triumphant return from where he left off in If Chins Could Kill with further hilarious, gut-wrenchingly honest confessions.

Bruce brings us through his life in the decade since his first memoir and his roles as varied as they are numerous- from his roles in the Spiderman movies to his self-referential My Name is Bruce to his role on #1 show Burn Notice and his new STARZ hit series Ash vs Evil Dead.

Over the last 15 years, Bruce has become a regular on the Wizard World convention circuit, has created his @GroovyBruce twitter account with over 400,000 followers and a Facebook page with almost 250,000 likes. His profile and reach is lightyears beyond where it was for Chins. Check him out at www.Bruce-Campbell.com.

Hail to the Chin will be bursting with pictures and the signature humor that Bruce brought to If Chins Could Kill and will be devoured by his legions of fans across the country.

ABOUT LAST FAN STANDING
Watch as sci-fi & horror icon, Bruce Campbell drills contestants with tough trivia in front of a live audience - separating the geek from the weak, the nerds from the herd!