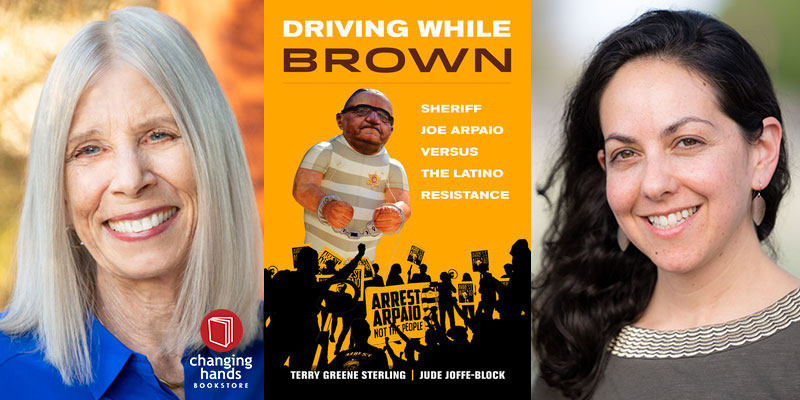 A limited number of free tickets are available. You can also support Changing Hands by purchasing the book via Eventbrite below, or by contributing what you can. A suggested contribution of $5 or $10—whatever you can afford—will help keep our virtual event series sustainable and accessible to all. Thank you!

Journalists Terry Greene Sterling and Jude Joffe-Block spent years chronicling the human consequences of Sheriff Joe Arpaio’s relentless immigration enforcement in Maricopa County, Arizona. In Driving While Brown, they tell the tale of two opposing movements that redefined Arizona’s political landscape—the restrictionist cause embraced by Arpaio and the Latino-led resistance that rose up against it.

The story follows Arpaio, his supporters, and his adversaries, including Lydia Guzman, who gathered evidence for a racial-profiling lawsuit that took surprising turns. Guzman joined a coalition determined to stop Arpaio, reform unconstitutional policing, and fight for Latino civil rights. Driving While Brown details Arpaio's transformation—from "America’s Toughest Sheriff," who forced inmates to wear pink underwear, into the nation’s most feared immigration enforcer who ended up receiving President Donald Trump’s first pardon. The authors immerse readers in the lives of people on both sides of the battle and uncover the deep roots of the Trump administration's immigration policies.

The result of tireless investigative reporting, this powerful book provides critical insights into effective resistance to institutionalized racism and the community organizing that helped transform Arizona from a conservative stronghold into a battleground state.

Terry Greene Sterling is affiliated faculty and writer-in-residence at the Walter Cronkite School of Journalism at Arizona State University. She is the author of Illegal. Her writing has been published in the Washington Post, the Rolling Stone, Newsweek, the Atlantic, Slate, the Daily Beast, the Village Voice, High Country News, the Guardian, the Arizona Center for Investigative Reporting, and other publications. Greene Sterling is Editor-at-Large for the Arizona Center for Investigative Reporting.

Jude Joffe-Block joined The Associated Press as a reporter and editor in 2020. Before that, she reported on immigration for more than a decade for outlets that include NPR, the Guardian, The World and Arizona Center for Investigative Reporting. She was a visiting journalist at the Russell Sage Foundation and a fellow with New America, the Center for the Future of Arizona, and the Logan Nonfiction Program while coauthoring this book. She began her journalism career in Mexico.

Alberto Ríos, Arizona’s inaugural poet laureate and a recent chancellor of the Academy of American Poets, is the author of twelve collections of poetry, most recently, Not Go Away Is My Name, preceded by A Small Story about the Sky, The Dangerous Shirt, and The Theater of Night, which received the PEN/Beyond Margins Award.  Published in the New Yorker, Paris Review, Ploughshares, and other journals, he has also written three short story collections and a memoir, Capirotada, about growing up on the Mexican border, with a novel forthcoming, A Good Map of All Things.  Ríos is also the host of the PBS programs Art in the 48 and Books & Co.  University Professor of Letters, Regents’ Professor, Virginia G. Piper Chair in Creative Writing, and the Katharine C. Turner Chair in English, Ríos has taught at Arizona State University since 1982.  In 2017, he was named director of the Virginia G. Piper Center for Creative Writing.