Mean Menu style requires jQuery library version 1.7 or higher, but you have opted to provide your own library. Please ensure you have the proper version of jQuery included. (note: this is not an error)
AUTHOR EVENT
Jeffrey Kronenfeld And Russ Kazmierczak: Dog Years
6PM THURSDAY, JANUARY 26 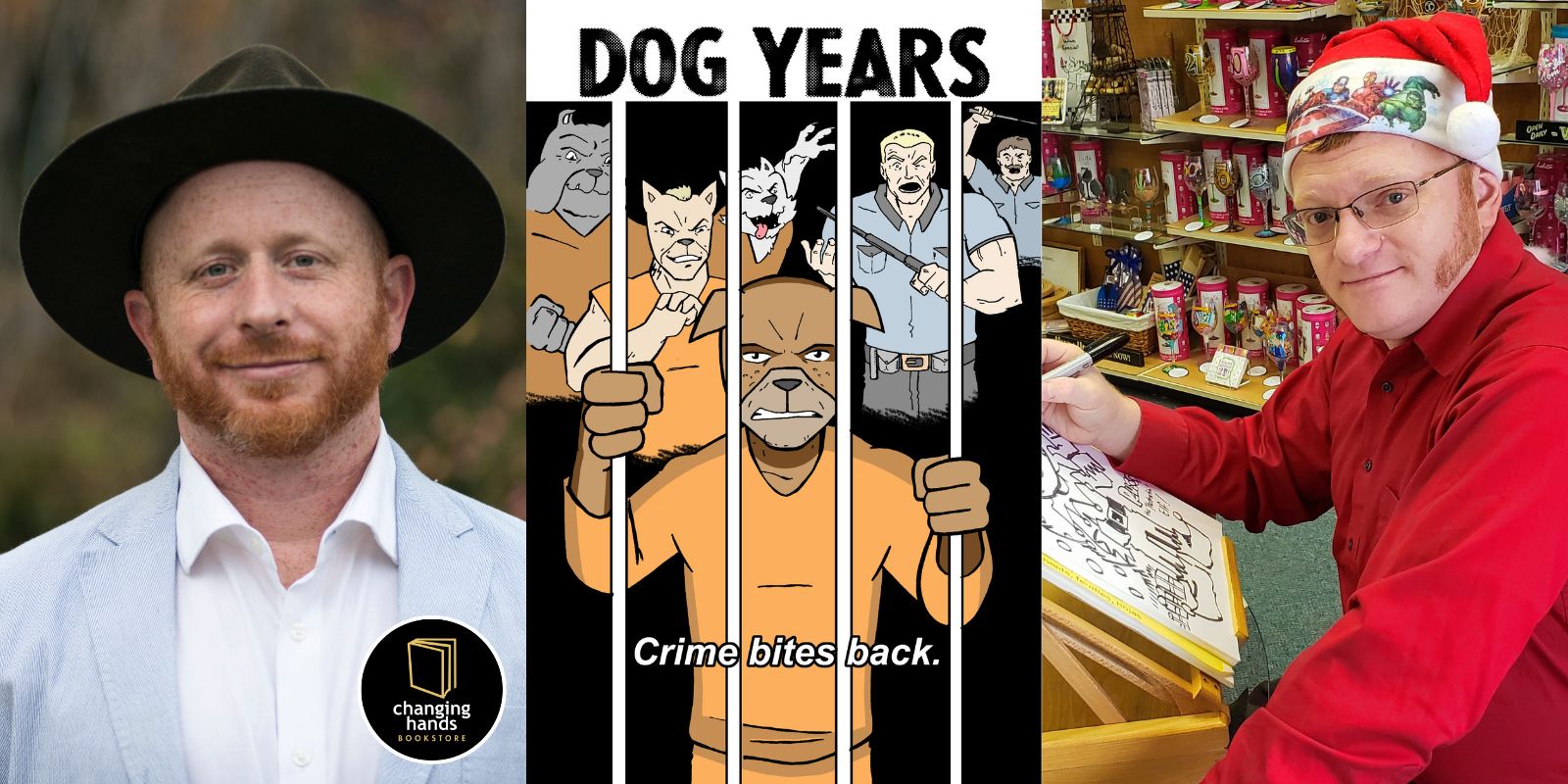 Local author Jeff Kronenfeld and Phoenix-based illustrator Russ Kazmierczak Jr. celebrate the launch of their graphic novel about mass incarceration in the US. This 32-page graphic novel follows Kurt Vilkas through a two-year prison sentence, where he faces violent gangs, sadistic guards, and the demons of his past.

What Maus did for the Holocaust, Dog Years does for mass incarceration in the US. This 32-page graphic novel follows Kurt Vilkas through a two-year prison sentence, where he faces violent gangs, sadistic guards, and the demons of his past. Inspired by Art Spiegelman’s animal stand-ins, inmates are depicted as anthropomorphic dogs to generate empathy and humor. In the end, the prisoners’ human faces are revealed, forcing readers to confront their role in the dehumanization of the incarcerated.

Inspired by real life events, this work of fiction explores how one inmate escapes the recidivist cycle entrapping millions of Americans through the transformative power of creative programing in prisons and jails, specifically creative writing.

The story begins with Kurt arriving in prison, where a letter from his mother implores him to reflect on how he went from an idealistic but misguided activist to a violent drug dealer. In response, he begins journaling about the events leading to his imprisonment, starting with his first arrest as an 18-year-old at an anti-war protest. The events Kurt writes about are shown in flashbacks interspersed between his struggles with the various threats and violent politics of the carceral system.

In this story the villains aren’t other prisoners, but instead are our unchecked emotions and the criminal justice system itself. Rather than sensationalizing or romanticizing the dangers of prison, the story centers the psychological and structural challenges inmates seeking to reform themselves face behind bars and upon release. The narrative culminates with Kurt sharing his story with other inmates in a writing workshop, demonstrating how humanities programing can be a part of the solution to the country’s epidemic of mass incarceration and recidivism. By the end, readers will see that it is not only possibly for individuals to change, but for society to as well.

ABOUT THE AUTHOR
Jeff Kronenfeld is an award-winning journalist, fiction writer, and screenwriter based out of Tempe, Arizona, where he lives with his wife and cat. He is the reports coordinator for the Arizona Capitol Times. Upon release from prison for charges related to growing and selling cannabis, he earned an English degree from ASU and volunteered with community organizations like Iron City Magazine, Four Chambers Press, and others.  www.jeff-k.com

ABOUT THE ILLUSTRATOR
Russ Kazmierczak Jr. is a Phoenix-based illustrator, artist, writer, and performer. He uses these diverse skills to tell stories that inspire others to pursue their creative passions. The renaissance man is a fixture in his local literary community where he works as both an independent publisher and freelance graphic artist.