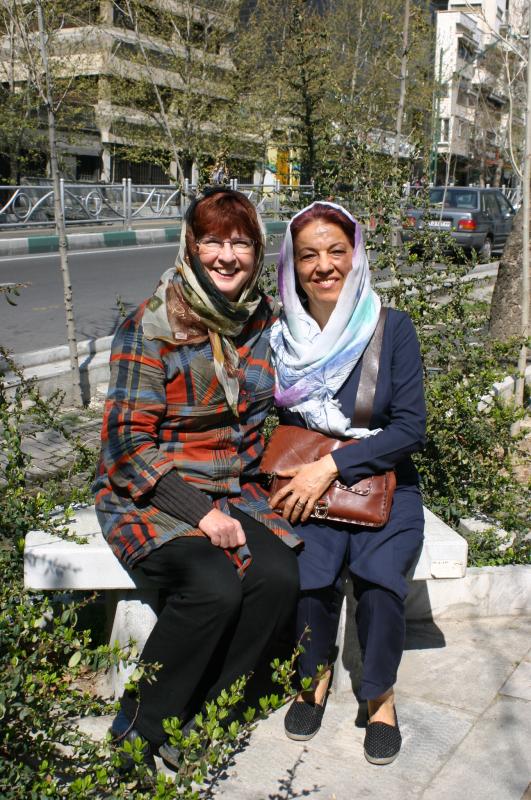 Join us for a double presentation, including a close-up view of Iran from a recent trip by a Tempe resident who was born in Ahvaz (in southwestern Iran) and a thumbnail sketch of the country by an American former Tempe resident who visited Iran in 2015 and 2019. Both trips lasted 21 days.


ABOUT THE PRESENTERS
FRANCES LECHNER, former resident of Tempe and Phoenix, spent three weeks in Iran in 2015. She holds an Iranian passport, and plans to return for a month for the Persian New Year in spring of 2019. Frances taught junior high school students, worked at Tempe's Gentle Strength Co-op during some of its most tumultuous years, and then worked for the United Dairymen of Arizona for 27 years. She is a graduate of Project CENTRL, a rural and agricultural leadership organization. Frances and her husband Emad Mohit now live in Yarnell, Arizona, where both are involved in community organizations. They and their cat Meshki , and their home survived the Yarnell Hill Fire of 2013.

From SASSAN AFSHIN:
Iran is in the headlines on a daily basis. A president called it one of "the axis of Evil." The Arizona senator sang a new version of the Beach Boys song: "Bomb bomb bomb, bomb bomb Iran!" What do we really know about Iran and its people? Hello, my name is Sassan Afshin. I was born in Ahvaz, Iran. I live in Tempe AZ. I am a teacher. In spring of 1976, when I was 12 years old, I found out I was coming to the U.S. I was in junior high in one of the top schools in Tehran and decided not to bother studying anymore. Two days before my departure in June 1976, I had failed four out of my six classes. Four days later, I was sitting on grass in a park in Chicago eating Kentucky Fried Chicken (original recipe). 30 years pass. It's 2006, I just received my renewed Islamic Republic of Iran passport and I am ready to go! After 2 kids and a failed marriage I was yearning to go back to my country. I had so much fun, I decided to go back again six months later. Fast forward to 2018, and I have just made another trip to my homeland. This time I paid more attention to details. I looked at everyday life. Opened a bank account. Signed a business contract. Visited many homes and paid attention to people's daily lives. I'd like to share these images, memories and stories with you. This will be a personal perspective with observations about the economy and the impact of the sanctions.
My Account • Sign In • Sign Out • Register
NEW & USED BOOKS
AUTHOR EVENTS • GIFTS Changing Hands Tempe
6428 S McClintock Dr, Tempe, AZ 85283
480.730.0205 [Google Map]
Sun: Closed
Mon-Sat: 11am-6pm
Changing Hands Phoenix
300 W Camelback Rd, Phoenix, AZ 85013
602.274.0067 [Google Map]
Sun: Closed
Mon-Sat: 11am-6pm