Mean Menu style requires jQuery library version 1.7 or higher, but you have opted to provide your own library. Please ensure you have the proper version of jQuery included. (note: this is not an error)
TEEN EVENT
Brigid Kemmerer: Forging Silver into Stars
7PM TUESDAY, JUNE 7 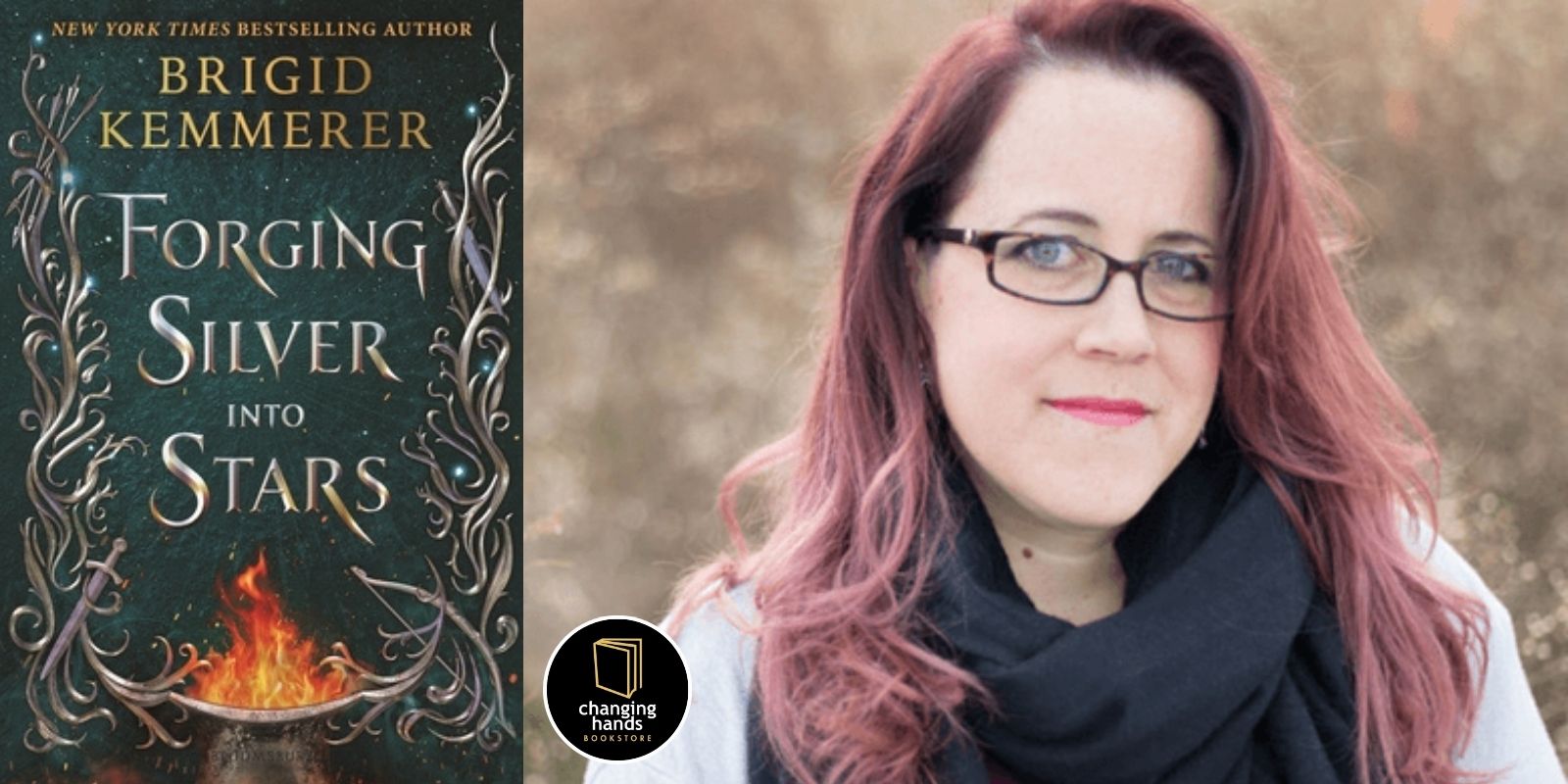 IN CONVERSATION WITH BILL KONIGSBERG

Tickets required. Admission is a copy of Forging Silver into Stars purchased from Changing Hands Bookstore via Eventbrite below.

New York Times bestselling author Brigid Kemmerer joins us in Tempe for an in conversation discussion of her new novel with local award-winning author, Bill Konigsberg (The Bridge).

BONUS! Be among the first 15 to register for the event to receive a Kingdom Map scarf!


ABOUT THE LIVE EVENT

Magic has been banished in the land of Syhl Shallow for as long as best friends Jax and Callyn can remember. They once loved the stories of the powerful magesmiths and mythical scravers who could conjure fire or control ice, but now they've learned that magic only leads to danger: magic is what killed Callyn's parents, leaving her alone to raise her younger sister. Magic never helped Jax, whose leg was crushed in an accident that his father has been punishing him for ever since. Magic won't save either of them when the tax collector comes calling, threatening to take their homes if they can't pay what they owe.

Meanwhile, Jax and Callyn are astonished to learn magic has already returned to Syhl Shallow--in the form of a magesmith who's now married to their queen. Now, the people of Syhl Shallow are expected to allow dangerous magic in their midst, and no one is happy about it.

When a stranger rides into town offering Jax and Callyn silver in exchange for holding secret messages for an anti-magic faction, the choice is obvious--even if it means they may be aiding in a plot to destroy their new king. It's a risk they're both willing to take. That is, until another visitor arrives: handsome Lord Tycho, the King's Courier, the man who's been tasked with discovering who's conspiring against the throne.

Suddenly, Jax and Callyn find themselves embroiled in a world of shifting alliances, dangerous flirtations, and ancient magic . . . where even the deepest loyalties will be tested.

ABOUT THE AUTHOR
Brigid Kemmerer is the author of the New York Times bestselling Cursebreaker series, which includes A Curse So Dark and Lonely, A Heart So Fierce and Broken, and A Vow So Bold and Deadly. She has also written the contemporary young adult romances Call It What You Want, More Than We Can Tell, and Letters to the Lost, as well as paranormal young adult stories, including the Elemental series and Thicker Than Water. A full-time writer, Brigid lives in the Baltimore area with her family.

ABOUT THE MODERATOR
Bill Konigsberg is the award-winning author of six young adult novels. THE PORCUPINE OF TRUTH won the PEN Center USA Literary Award and the Stonewall Book Award in 2016. OPENLY STRAIGHT won the Sid Fleischman Award for Humor, was a finalist for the Amelia Elizabeth Walden Award and Lambda Literary Award in 2014 and has been translated into five languages. His debut novel, OUT OF THE POCKET, won the Lambda Literary Award in 2009. THE MUSIC OF WHAT HAPPENS, released in 2019, received two starred reviews, and has been optioned for a film. His latest novel, THE BRIDGE, was released in the fall of 2020. It has received two starred reviews. In 2018, The National Council of Teachers of English (NCTE)’s Assembly on Literature for Adolescents (ALAN) established the Bill Konigsberg Award for Acts and Activism for Equity and Inclusion through Young Adult Literature.

Prior to turning his attention to writing books for teens, Bill was a sports writer and editor for The Associated Press and ESPN.com. He lives in Phoenix, Arizona, with his husband, Chuck, and their Australian Labradoodles, Mabel and Buford.