Mean Menu style requires jQuery library version 1.7 or higher, but you have opted to provide your own library. Please ensure you have the proper version of jQuery included. (note: this is not an error)
AUTHOR EVENT
Taylor Hahn: The Lifestyle
7PM THURSDAY, JUNE 9 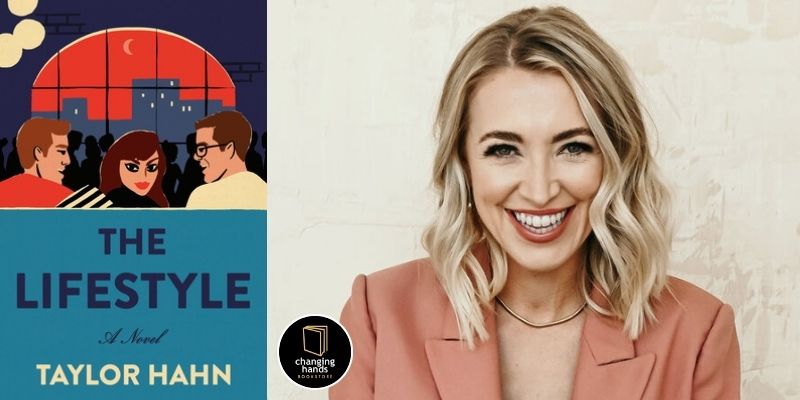 IN CONVERSATION WITH LAUREN GILGER

Don't miss the beach read of the summer! A heartwarming and hilarious novel about swinging, marriage, and complexities of the heart.

“This book is fun as hell. Hilarious, addictive, moving, and sexy. I lost track of time reading it, and I couldn’t get enough!” —Jasmine Guillory, bestselling author of While We Were Dating

Georgina Wagman has it all—a great marriage, a great job at a prestigious law firm, and great friends. She’s living the life she always wanted, and everything is perfect. Until, that is, she walks in on her husband Nathan in a compromising position with a junior associate. Georgina has a moment of crisis. But divorce is not a part of the five-year plan, so she comes up with an idea to save her marriage and recapture the spark. She and Nathan are going to become swingers.

Georgina isn’t going to embark on this adventure alone, though. Her friends Felix and Norah and their respective partners decide to tag along for the ride. They’ve got relationship woes of their own that swinging just might fix. Georgina, convinced Felix and Norah belong together, is thrilled. What better place to reignite romance between two people destined to be together than a swingers’ party? Her plan is foolproof, until she runs into a college ex at the first party. When they reconnect, Georgina will find herself torn between her head and her heart, with her very happiness hanging in the balance. Perfect for fans of Jennifer Weiner and Sophie Kinsella, The Lifestyle is a playful homage to Jane Austen's Emma Woodhouse and an outrageously fun summer read.

ABOUT THE AUTHOR
TAYLOR HAHN is a writer and lawyer based in Los Angeles. She is a graduate of Loyola Marymount University and Fordham University School of Law. The Lifestyle is her first novel. Visit her online at www.taylorhahn.com.

ABOUT THE MODERATOR
Lauren Gilger is an award-winning journalist whose work has impacted communities large and small, exposing injustices and giving a voice to the voiceless and marginalized. She is dedicated to building community through storytelling and believes everyone has a story to tell. Gilger worked as an investigative producer and reporter for ABC15 News in Phoenix after earning her master’s degree in broadcast journalism from the Walter Cronkite School of Journalism and Mass Communication in 2011, where she was named Outstanding Graduate Student. She was the recipient of the prestigious George Foster Peabody Award and an Edward R. Murrow Award in 2013 after her work forced one of the world’s largest automakers to recall more than 700,000 SUVs. Her work has uncovered the systemic separation of immigrant families in the detention system, put pressure on the FDA to review a controversial form of birth control that has injured women worldwide, and exposed the backlog of untested rape kits in the country’s sixth-largest metro area. In the Valley, Gilger has worked as a contributor for the Phoenix New Times and a clerk at the East Valley Tribune. Nationally, her work has appeared in the Washington Post and on ABC’s Nightline.