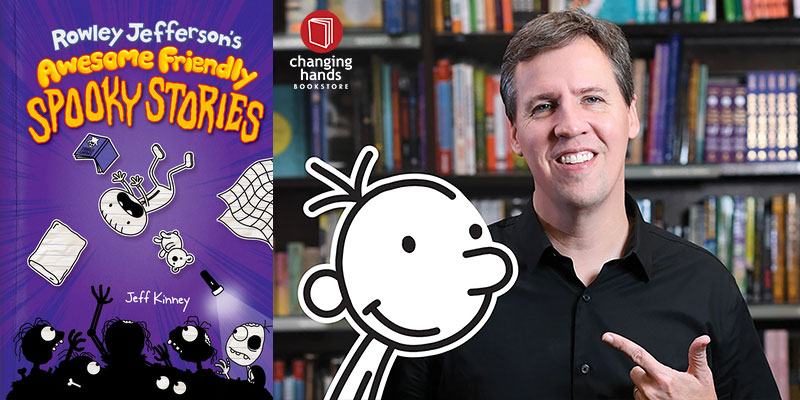 Please visit our website to purchase additional titles by Jeff Kinney. Order by March 16 for signed copies, while supplies last. (Mailouts will ship out starting the day after the event on March 26.)

ABOUT THE BOOK
Scare yourself silly with Rowley Jefferson’s Awesome Friendly Spooky Stories by Jeff Kinney, the #1 international bestselling author of Diary of a Wimpy Kid!

Grab a flashlight, crawl under the covers, and dive into the twisted, unexpectedly hilarious world of Rowley Jefferson’s imagination. You’ll meet zombies, vampires, ghosts, and much more in these comically terrifying tales.

Rowley’s spooky stories might leave you laughing, but beware—you could end up sleeping with the lights on!

ABOUT THE AUTHOR
Jeff Kinney is the #1 USA Today, New York Times, and Wall Street Journal bestselling author of the Diary of a Wimpy Kid series and a six-time Nickelodeon Kids’ Choice Award winner for Favorite Book. The Deep End, book 15, was published in November 2020, and was an instant #1 global bestseller. Diary of an Awesome Friendly Kid: Rowley Jefferson’s Journal was published in April 2019, was an instant #1 global bestseller, and has remained at the top of the New York Times bestseller list since publication, along with the follow-up book, Rowley Jefferson’s Awesome Friendly Adventure. Jeff has been named one of Time magazine’s 100 Most Influential People in the World and is one of the Top 10 bestselling authors of all time. He is also the creator of Poptropica, which was named one of Time’s 50 Best Websites. He spent his childhood in the Washington, D.C., area and moved to New England in 1995. Jeff lives with his wife and two sons in Massachusetts, where they own a bookstore, An Unlikely Story.