Enter our weekly Instagram giveaway. New books every Tuesday, a new winner every Friday!
ONLINE ORDERING HAS BEEN TURNED OFF FOR THIS EVENT
Get your book and ticket in-store before the event, or by phone at 480.730.0205.
Amy Goodman with Denis Moynihan
Democracy Now!: Twenty Years Covering the Movements Changing America
10:30AM SATURDAY, MAY 20
LOCATION: TEMPE 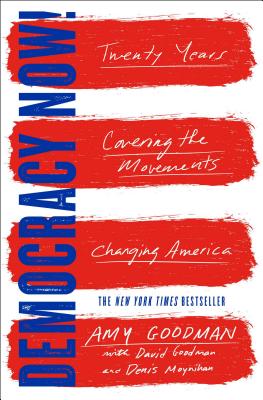 Host and executive producer of the independent news program Democracy Now!, Amy Goodman visits with the paperback release of her bestselling book.


ABOUT THE BOOK
A celebration of the revolutionary change Amy and David Goodman have witnessed during the two decades of their acclaimed television and radio news program Democracy Now!—and how small individual acts from progressive heroes have produced lasting results.

In 1996 Amy Goodman began hosting a show called Democracy Now! to focus on the issues and movements that are too often ignored by the corporate media. Today it is the largest public media collaboration in the US. This important book looks back over the past twenty years of Democracy Now! and the powerful movements and charismatic leaders who are re-shaping our world. Goodman takes us along as she goes to where the silence is, bringing out voices from the streets of Ferguson to Staten Island, Wall Street, and South Carolina to East Timor—and other places where people are rising up to demand justice.

Giving voice to those who have been forgotten, forsaken, and beaten down by the powerful, Democracy Now! pays tribute to those progressive heroes—the whistleblowers, the organizers, the protestors—who have brought about remarkable, often invisible change over the last couple of decades in seismic ways. This is "an impassioned book aiming to fuel informed participation, outrage, and dissent." (Kirkus Reviews)

She will be joined at the book signing by her co-author, Democracy Now!'s Denis Moynihan.