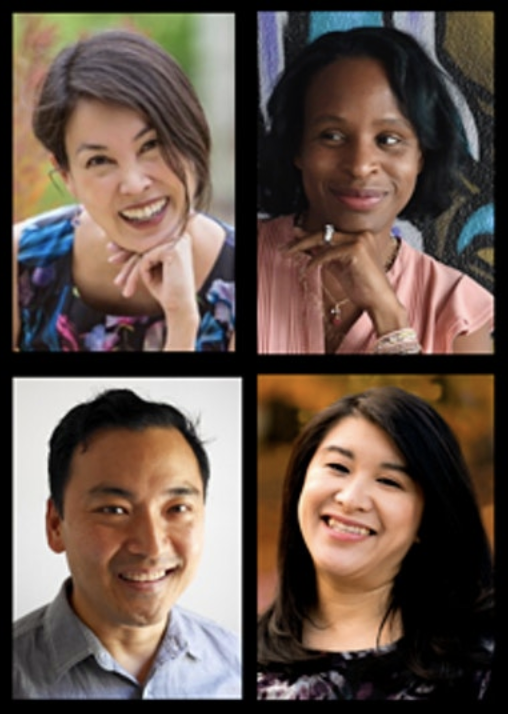 
Join four early members of the We Need Diverse Books team, I.W. Gregorio (This Is My Brain in Love), Stacey Lee (The Downstairs Girl), David Yoon (Frankly in Love), and Nicola Yoon (The Sun Is Also a Star) as they discuss writing their #OwnVoices books, what it's like to be authors during the pandemic, and their hopes for the future.

To attend this virtual YA panel, we ask for a $5 contribution to help keep our virtual event series—and our bookstores—going until we're able to host live events again.*

Post-event, attendees will receive an email with a code for $5 off any of the panelists' books.

*Our Zoom events are password-protected with wait rooms enabled. The password is entered automatically by clicking the event link when logged in to a Zoom account. We'll admit guests shortly before 4pm and throughout the event. If you join late, please be patient—we'll admit you when we see you.

Frankly in Love -- High school senior Frank Li takes a risk to go after a girl his parents would never approve of, but his plans will leave him wondering if he ever really understood love--or himself--at all.

The Sun is Also a Star -- Two teens--Daniel, the son of Korean shopkeepers, and Natasha, whose undocumented family is here from Jamaica--cross paths in New York City on an eventful day in their lives--Daniel is on his way to an interview with a Yale alum, Natasha is meeting with a lawyer to try and prevent her family's deportation to Jamaica--and fall in love.

Everything, Everything -- The story of a teenage girl who's literally allergic to the outside world. When a new family moves in next door, she begins a complicated romance that challenges everything she's ever known. The narrative unfolds via vignettes, diary entries, texts, charts, lists, illustrations, and more.

The Downstairs Girl -- 1890, Atlanta. By day, seventeen-year-old Jo Kuan works as a lady's maid for the cruel Caroline Payne, the daughter of one of the wealthiest men in Atlanta. But by night, Jo moonlights as the pseudonymous author of a newspaper advice column for 'the genteel Southern lady.

This is My Brain in Love -- Rising high school juniors Jocelyn Wu and Will Domenici fall in love while trying to save the Wu family restaurant, A-Plus Chinese Garden.

Nicola Yoon is the #1 New York Times bestselling author of Everything, Everything and The Sun Is Also a Star. She is a National Book Award finalist, a Michael L. Printz Honor Book recipient and Coretta Scott King New Talent Award winner. Both her novels have been made into major motion pictures. Nicola grew up in Jamaica and Brooklyn, and lives in Los Angeles with her family.

David Yoon grew up in Orange County, California, and now lives in Los Angeles with his wife, novelist Nicola Yoon, and their daughter. He drew the illustrations for Nicola's #1 New York Times bestseller Everything, Everything. He is the author of the New York Times bestseller Frankly in Love, which was a William C. Morris Award finalist and an Asian/Pacific American Award for Young Adult Literature Honor book. You can visit him at davidyoon.com.

Stacey Lee is a fourth generation Chinese-American whose people came to California during the heydays of the cowboys. She believes she still has a bit of cowboy dust in her soul. A native of southern California, she graduated from UCLA then got her law degree at UC Davis King Hall. After practicing law in the Silicon Valley for several years, she finally took up the pen because she wanted the perks of being able to nap during the day, and it was easier than moving to Spain. She plays classical piano, raises children, and writes YA fiction. Please visit her website at www.staceyhlee.com.

I. W. Gregorio is a practicing surgeon by day, masked avenging YA writer by night. After getting her MD at Yale School of Medicine, she did her residency at Stanford, where she met the intersex patient who inspired her debut novel, None of the Above (Balzer + Bray / HarperCollins), which is a 2016 Lambda Literary Award finalist, a Spring 2015 Publishers Weekly Flying Start, an ALA Booklist Top Ten Sports Book for Youth, and a 2015 ABC Children's Group Best Book for Young Readers. It was also named to the 2016 American Library Association Rainbow List. She is proud to be a board member of interACT: Advocates for Intersex Youth, and is a founding member of We Need Diverse Books. Her writing has appeared in The Washington Post, Newsweek, Scientific American, San Francisco Chronicle, San Jose Mercury News and New York Post, among others. She lives in Pennsylvania with her husband and two children. Find her on Instagram and Twitter as @iwgregorio, or on her website at www.iwgregorio.com.