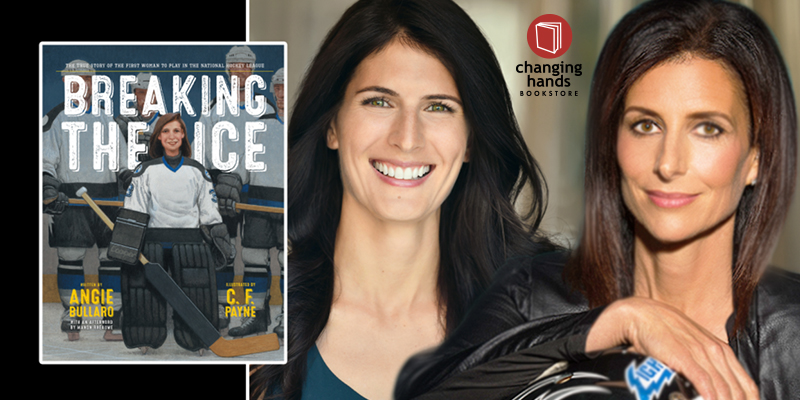 You'll receive the Zoom link by email within 24 hours of the event's start time. For information about participating in virtual events, see our FAQ page.
Join us as we celebrate Children's Book Week with Angie Bullaro and Manon Rhéaume for a virtual conversation as they present Breaking the Ice, the inspiring true story of Manon Rhéaume, the first and only woman to play a game in the National Hockey League.

Bonus! Purchase a copy of Breaking the Ice from Changing Hands to receive a bookplate signed by author Angie Bullaro and Ice Hockey Trailblazer, Manon Rhéaume.

The inspiring true story of Manon Rhéaume, the first and only woman to play a game in the National Hockey League, featuring an afterward from Manon herself.

"One day, a woman will play in the National Hockey League. If no one prevents her," said a twelve-year-old Manon Rhéaume. Manon always dreamed of playing hockey. So, when the team her father coached needed a goalie, five-year-old Manon begged for the chance to play. She didn't care that she'd be the only girl in the entire league or that hockey was considered a "boys' sport" in her hometown of Lac-Beauport, Quebec, Canada. All she cared about was the game. After her father gave her that first chance to play, she embarked on a spectacular, groundbreaking career in hockey.

At every level of competition, Manon was faced with naysayers, but she continued to play, earning her place on prestigious teams and ultimately becoming the first woman to play a game in the NHL. Including an afterword written by Manon herself, Breaking the Ice is the true story of one girl's courage, determination, and love for the sport.

ABOUT THE AUTHOR
Angie Bullaro makes her authorial debut with Breaking the Ice. She has been playing sports for about as long as she has been able to walk. She has always loved sports stories about underdogs and feels privileged to tell such an important story. She is now a (somewhat) proficient ice hockey goalie and an avid hockey fan. Angie lives in New York City with her husband, Mike Musco. Along with writing, she is also an actress and film producer. You can learn more about her at AngieBullaro.com.