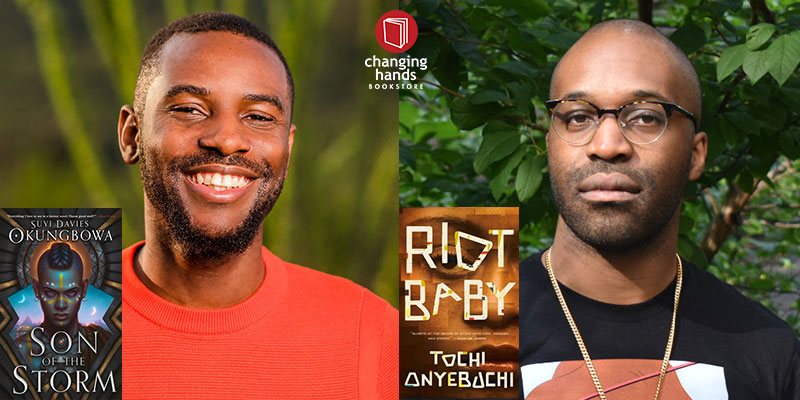 A limited number of free tickets are available. You can also support Changing Hands by purchasing the book via Eventbrite below, or by contributing what you can. A suggested contribution of $5 or $10—whatever you can afford—will help keep our virtual event series sustainable and accessible to all. Thank you! 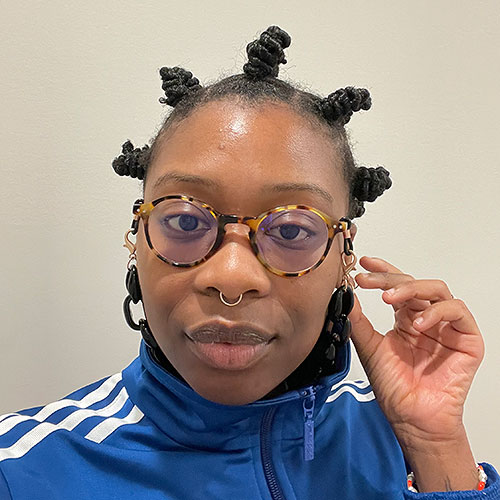 In Conversation with Zoé Samudzi

SON OF THE STORM:
From one of the most exciting new storytellers in epic fantasy, Son of the Storm is a sweeping tale of violent conquest and forgotten magic set in a world inspired by the pre-colonial empires of West Africa.

"Everything I love in a fantasy novel. Damn good stuff!" —Jenn Lyons, author of The Ruin of Kings

In the ancient. city of Bassa, Danso is a clever scholar on the cusp of achieving greatness—only he doesn’t want it. Instead, he prefers to chase forbidden stories about what lies outside the city walls. The Bassai elite claim there is nothing of interest. The city’s immigrants are sworn to secrecy.

But when Danso stumbles across a warrior wielding magic that shouldn’t exist, he’s put on a collision course with Bassa’s darkest secrets. Drawn into the city’s hidden history, he sets out on a journey beyond its borders. And the chaos left in the wake of his discovery threatens to destroy the empire.

Praise for Son of the Storm:

"With an intricate and irresistible plot, Okungbowa weaves a vibrant tale of betrayal, intrigue, and revolution.” Anthony Ryan, author of Blood Song

"A thrilling, fantastical adventure that introduces a beguiling new world . . . and then rips apart everything you think you know." —S. A. Chakraborty, author of The City of Brass

Winner of the 2020 New England Book Award for Fiction!

"Riot Baby, Onyebuchi's first novel for adults, is as much the story of Ella and her brother, Kevin, as it is the story of black pain in America, of the extent and lineage of police brutality, racism and injustice in this country, written in prose as searing and precise as hot diamonds."—The New York Times

"Riot Baby bursts at the seams of story with so much fire, passion and power that in the end it turns what we call a narrative into something different altogether."—Marlon James

Ella has a Thing. She sees a classmate grow up to become a caring nurse. A neighbor's son murdered in a drive-by shooting. Things that haven't happened yet. Kev, born while Los Angeles burned around them, wants to protect his sister from a power that could destroy her. But when Kev is incarcerated, Ella must decide what it means to watch her brother suffer while holding the ability to wreck cities in her hands.

Rooted in the hope that can live in anger, Riot Baby is as much an intimate family story as a global dystopian narrative. It burns fearlessly toward revolution and has quietly devastating things to say about love, fury, and the black American experience.

Ella and Kev are both shockingly human and immeasurably powerful. Their childhoods are defined and destroyed by racism. Their futures might alter the world.

ABOUT THE AUTHORS
Suyi Davies Okungbowa is a Nigerian author of fantasy, science fiction and general speculative fiction inspired by his West-African origins. He is the author of the highly-anticipated epic fantasy series, The Nameless Republic, forthcoming from Orbit Books in 2021. His highly acclaimed debut, the godpunk fantasy novel David Mogo, Godhunter (Abaddon, 2019), was hailed as "the subgenre's platonic deific ideal" by WIRED and nominated for the BSFA Award. His shorter fiction and nonfiction have appeared internationally in periodicals like Tor.com, Lightspeed, Nightmare, Strange Horizons, Fireside, Podcastle, Ozy, and anthologies like Year's Best Science Fiction and Fantasy (Saga, 2020), A World of Horror (Dark Moon Books, 2018) and People of Colour Destroy Science Fiction (John Joseph Adams, 2017).

As a speaker and instructor, Suyi teaches college-level writing at the University of Arizona, where he is also completing his MFA in Creative Writing. He has guest lectured at public workshops at venues like the Piper Writing Centre at ASU and the Tucson Festival of Books, as well as appeared at various conferences, conventions, readings and school visits, including at the University of Washington and University of Chicago. His work has earned him appearances in the San Francisco Chronicle and SFX Magazine, interviews on NPR, as well as a Carl Brandon Scholarship. He was named one of 50 Nigerians in the YNaija 2020 New Establishment.

He currently lives between Lagos, Nigeria and Tucson, Arizona.


Tochi Onyebuchi is the author of Beasts Made of Night, its sequel Crown of Thunder, War Girls and his adult fiction debut Riot Baby. He has graduated from Yale University, New York University’s Tisch School of the Arts, Columbia Law School, and L’institut d’études politiques with a Masters degree in Global Business Law.

Born in Massachusetts and raised in Connecticut, Tochi is a consummate New Englander, preferring the way the tree leaves turn the color of fire on I-84 to mosquitoes and being able to boil eggs on the pavement. He has worked in criminal justice, the tech industry, and immigration law, and prays every day for a new album from System of a Down.

ABOUT THE MODERATOR
Zoé Samudzi is a Zimbabwean-American writer and activist known for her book As Black as Resistance. Samudzi has written for The New Inquiry, The Daily Beast and Vice magazine. Samudzi was a 2017 Public Imagination Fellow at the Yerba Buena Center for the Arts.