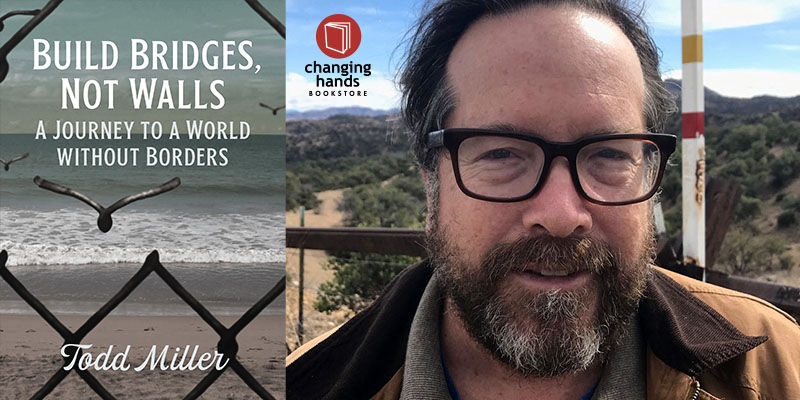 Author Todd Miller discusses his latest, a collection of essays in which Miller argues for the abolition of borders.

Is it possible to create a borderless world? How might it be better equipped to solve the global emergencies threatening our collective survival? Build Bridges, Not Walls is an inspiring, impassioned call to envision--and work toward--a bold new reality.

Todd Miller cuts through the facile media myths and escapes the paralyzing constraints of a political 'debate' that functions mainly to obscure the unconscionable inequalities that borders everywhere secure. In its soulfulness, its profound moral imagination, and its vision of radical solidarity, Todd Miller's work is as indispensable as the love that so palpably guides it.--Ben Ehrenreich, author of Desert Notebooks: A Road Map for the End of Time

The stories of the humble people of the earth Miller documents ask us to also tear down the walls in our hearts and in our heads. What proliferates in the absence of these walls and in spite of them, Miller writes, is the natural state of things centered on kindness and compassion.--Nick Estes, author of Our History Is the Future: Standing Rock Versus the Dakota Access Pipeline, and the Long Tradition of Indigenous Resistance

By the time Todd Miller spots him, Juan Carlos has been wandering alone in a remote border region for days. Parched, hungry and disoriented, he approaches and asks for a ride. Miller's instinct is to oblige, but he hesitates: Furthering an unauthorized person's entrance into the U.S. is a federal crime.

Todd Miller has been reporting from international border zones for over twenty-five years. In Build Bridges, Not Walls, he invites readers to join him on a journey that begins with the most basic of questions: What happens to our collective humanity when the impulse to help one another is criminalized?

A series of encounters--with climate refugees, members of indigenous communities, border authorities, modern-day abolitionists, scholars, visionaries, and the shape-shifting imagination of his four-year-old son--provoke a series of reflections on the ways in which nation-states create the problems that drive immigration, and how the abolition of borders could make the world a more sustainable, habitable place for all.

Is it possible to imagine a borderless world? How could it emerge, and how might it be better equipped to solve the global emergencies that threaten our collective survival? Build Bridges, Not Walls is an inspiring, impassioned call to envision--and work toward--a bold new reality.

Praise for Build Bridges, Not Walls:

Todd Miller's deeply reported, empathetic writing on the American border is some of the most essential journalism being done today. As this book reveals, the militarization of our border is a simmering crisis that harms vulnerable people every day. It's impossible to read his work without coming away changed.--Adam Conover, creator and host of Adam Ruins Everything and host of Factually

All of Todd Miller's work is essential reading, but Build Bridges, Not Walls is his most compelling, insightful work yet.--Dean Spade, author of Mutual Aid: Building Solidarity During This Crises (And the Next)

Miller calls us to see how borders subject millions of people to violence, dehumanization, and early death. More importantly, he highlights the urgent necessity to abolish not only borders, but the nation-state itself.--A. Naomi Paik, author of Bans, Walls Raids, Sanctuary: Understanding U.S. Immigration for the Twenty-First Century and Rightlessness: Testimony and Redress in U.S. Prison Camps Since World War II

Todd Miller not only makes the case for tearing down the walls of Fortress America, but also for the future of the planet and humanity. The stories of the humble people of the earth he documents ask us to also tear down the walls in our hearts and in our heads. What proliferates in the absence of these walls and in spite of them, Miller writes, is the natural state of things centered on kindness and compassion.--Nick Estes, author of Our History Is the Future: Standing Rock Versus the Dakota Access Pipeline, and the Long Tradition of Indigenous Resistance

Miller lays bare the senselessness and soullessness of the nation-state and its borders and border walls, and reimagines, in their place, a complete and total restoration, therefore redemption, of who we are, and of who we are in desperate need of becoming.--Brandon Shimoda, author of The Grave on the Wall

Miller's latest book is a personal, wide-ranging, and impassioned call for abolishing borders.--John Washington, author of The Dispossessed: A Story of Asylum and the US-Mexican Border and Beyond

Through careful reporting and vivid personal experience, Miller illuminates the immediate need to bring people closer in an era of dehumanizing violence that is at the heart of U.S. political discourse and institutions and which has become painfully condensed in the Trump years.--Oswaldo Zavala, journalist and professor of Latin American literature and culture at the City University of New York and author of Drug Cartels Do Not Exist: Narcotrafficking and Culture in Mexico

ABOUT THE AUTHOR
Todd Miller has researched and written about border issues for more than fifteen years, the last eight as an independent journalist and writer. He resides in Tucson, Arizona, but also has spent many years living and working in Oaxaca, Mexico. His work has appeared in the New York Times, San Francisco Chronicle, TomDispatch, The Nation, In These Times, Guernica, Al Jazeera English, among other places. Miller has authored three books: Empire of Borders: The Expansion of the U.S. Border Around the World (Verso, 2019), Storming the Wall: Climate Change, Migration, and Homeland Security (City Lights, 2017), which won the 2018 Izzy Award for Excellence in Investigative Journalism, and Border Patrol Nation: Dispatches from the Front Lines of Homeland Security (City Lights, 2014).He's a contributing editor on border and immigration issues for NACLA Report on the Americas and its column "Border Wars."

Guadalupe Castillo is a retired history professor at Pima Community College in Tucson as well as an activist in the Chicano civil rights movement. Born and raised in Tucson, Arizona, Lupe is a co-founder of the University of Arizona’s Movimiento Estudiantil Chicano de Aztlán (MEChA).

In 1970, she helped organize Tucson residents to establish the El Rio Neighborhood Center and fought to build the Joaquin Murrieta Park on Tucson’s west side. At Pima Community College, she was one of the first professors to develop Chicano/a studies courses. She has encouraged students to see education as a tool that will enable positive change, and she has been a fierce advocate of the community for various social issues for more than 40 years.

Today she continues to work with the Keep Tucson Together project and has been present for nearly every migrant trail.