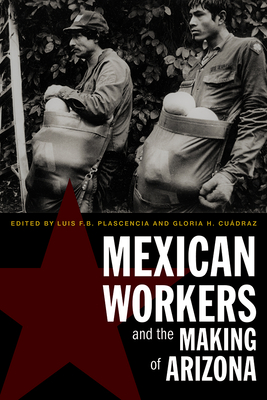 Co-editors Gloria Cuádraz and Luis Plascencia discuss their book, which fills an important gap in our understanding of Mexicans and Mexican Americans in the Southwest by turning the scholarly gaze to Arizona, which has had a long-standing impact on national policy and politics.

On any given day in Arizona, thousands of Mexican-descent workers labor to make living in urban and rural areas possible. The majority of such workers are largely invisible. Their work as caretakers of children and the elderly, dishwashers or cooks in restaurants, and hotel housekeeping staff, among other roles, remains in the shadows of an economy dependent on their labor.

Mexican Workers and the Making of Arizona centers on the production of an elastic supply of labor, revealing how this long-standing approach to the building of Arizona has obscured important power relations, including the state’s favorable treatment of corporations vis-à-vis workers. Building on recent scholarship about Chicanas/os and others, the volume insightfully describes how U.S. industries such as railroads, mining, and agriculture have fostered the recruitment of Mexican labor, thus ensuring the presence of a surplus labor pool that expands and contracts to accommodate production and profit goals.

The volume’s contributors delve into examples of migration and settlement in the Salt River Valley; the mobilization and immobilization of cotton workers in the 1920s; miners and their challenge to a dual-wage system in Miami, Arizona; Mexican American women workers in midcentury Phoenix; the 1980s Morenci copper miners’ strike and Chicana mobilization; Arizona’s industrial and agribusiness demands for Mexican contract labor; and the labor rights violations of construction workers today.

Mexican Workers and the Making of Arizona fills an important gap in our understanding of Mexicans and Mexican Americans in the Southwest by turning the scholarly gaze to Arizona, which has had a long-standing impact on national policy and politics.

PARKING / LIGHT RAIL
ABOUT THE AUTHORS
Luis F. B. Plascencia is the author of Disenchanting Citizenship: Mexican Migrants and the Boundaries of Belonging.

Mexican Workers and the Making of Arizona (Paperback)