Mean Menu style requires jQuery library version 1.7 or higher, but you have opted to provide your own library. Please ensure you have the proper version of jQuery included. (note: this is not an error)
Hurry! Enjoy $5 off $25 in-store and online with code SHOPLOCAL
Through Cyber Monday. DETAILS > ×
VIRTUAL AUTHOR EVENT
Peter Robison: Flying Blind
6:30PM (8:30PM ET) TUESDAY, NOVEMBER 30 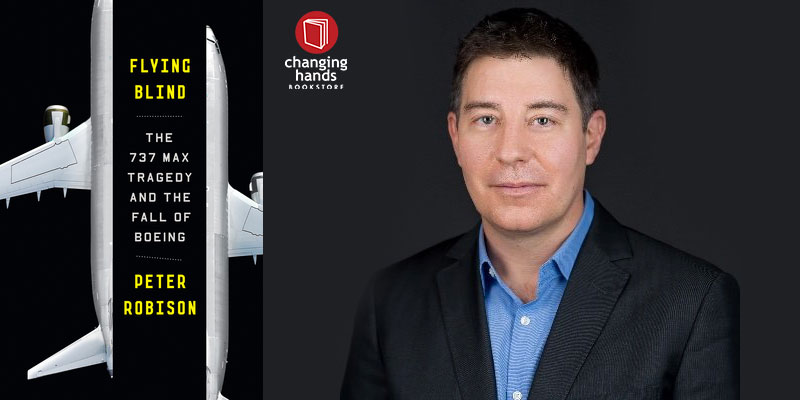 
Limited FREE tickets available. You can also support Changing Hands by purchasing the book via Eventbrite below, or by contributing what you can. A suggested contribution of $5 or $10—whatever you can afford—will help keep our virtual event series sustainable and accessible to all. Thank you!

Moderated by KJZZ's Lauren Gilger
Gilger is a Peabody Award-winning journalist and cohost of KJZZ's The Show. More here.

From the award-winning reporter for Bloomberg, a suspenseful behind-the-scenes look at the dysfunction and mismanagement that contributed to one of the worst tragedies in modern aviation: the 2018 and 2019 crashes of the Boeing 737 MAX.

Boeing is a century-old titan of industry. It played a major role in the early days of commercial flight, World War II bombing missions, and moon landings. The planemaker remains a cornerstone of the U.S. economy, as well as a linchpin in the awesome routine of modern air travel. But in 2018 and 2019, two crashes of the Boeing 737 MAX 8 killed 346 people. The crashes exposed a shocking pattern of malfeasance, leading to the biggest crisis in the company’s history—and one of the costliest corporate scandals ever.

How did things go so horribly wrong at Boeing?

Flying Blind is the definitive exposé of the disasters that transfixed the world. Drawing from exclusive interviews with current and former employees of Boeing and the FAA; industry executives and analysts; and family members of the victims, it reveals how a broken corporate culture paved the way for catastrophe. It shows how in the race to beat the competition and reward top executives, Boeing skimped on testing, pressured employees to meet unrealistic deadlines, and convinced regulators to put planes into service without properly equipping them or their pilots for flight. It examines how the company, once a treasured American innovator, became obsessed with the bottom line, putting shareholders over customers, employees, and communities.

By Bloomberg investigative journalist Peter Robison, who covered Boeing as a beat reporter during the company’s fateful merger with McDonnell Douglas in the late ‘90s, this is the story of a business gone wildly off course. At once riveting and disturbing, it shows how an iconic company fell prey to a win-at-all-costs mentality, threatening an industry and endangering countless lives.

*Our Zoom events are password-protected with wait rooms enabled. The password is entered automatically by clicking the event link when logged in to a Zoom account. We'll admit guests shortly before 6:30PM and throughout the event. If you join late, please be patient—we'll admit you when we see you.

ABOUT THE AUTHOR
PETER ROBISON is an investigative journalist for Bloomberg and Bloomberg Businessweek. He is a recipient of the Gerald Loeb Award, the Malcolm Forbes Award, and four “Best in Business” awards from the Society for Advancing Business Editing and Writing. A native of St. Paul, Minnesota, with an honors degree in history from Stanford University, he lives in Seattle, Washington, with his wife and two sons.