Mean Menu style requires jQuery library version 1.7 or higher, but you have opted to provide your own library. Please ensure you have the proper version of jQuery included. (note: this is not an error)
FOUR AUTHOR EVENT
Laurie Fagen (Dead Air), Jan Kelly (Elder Brother’s Maze), Judith Clayton Van (Faster Horses), and Karen Randau (Into the Fog)
6PM THURSDAY, NOVEMBER 3 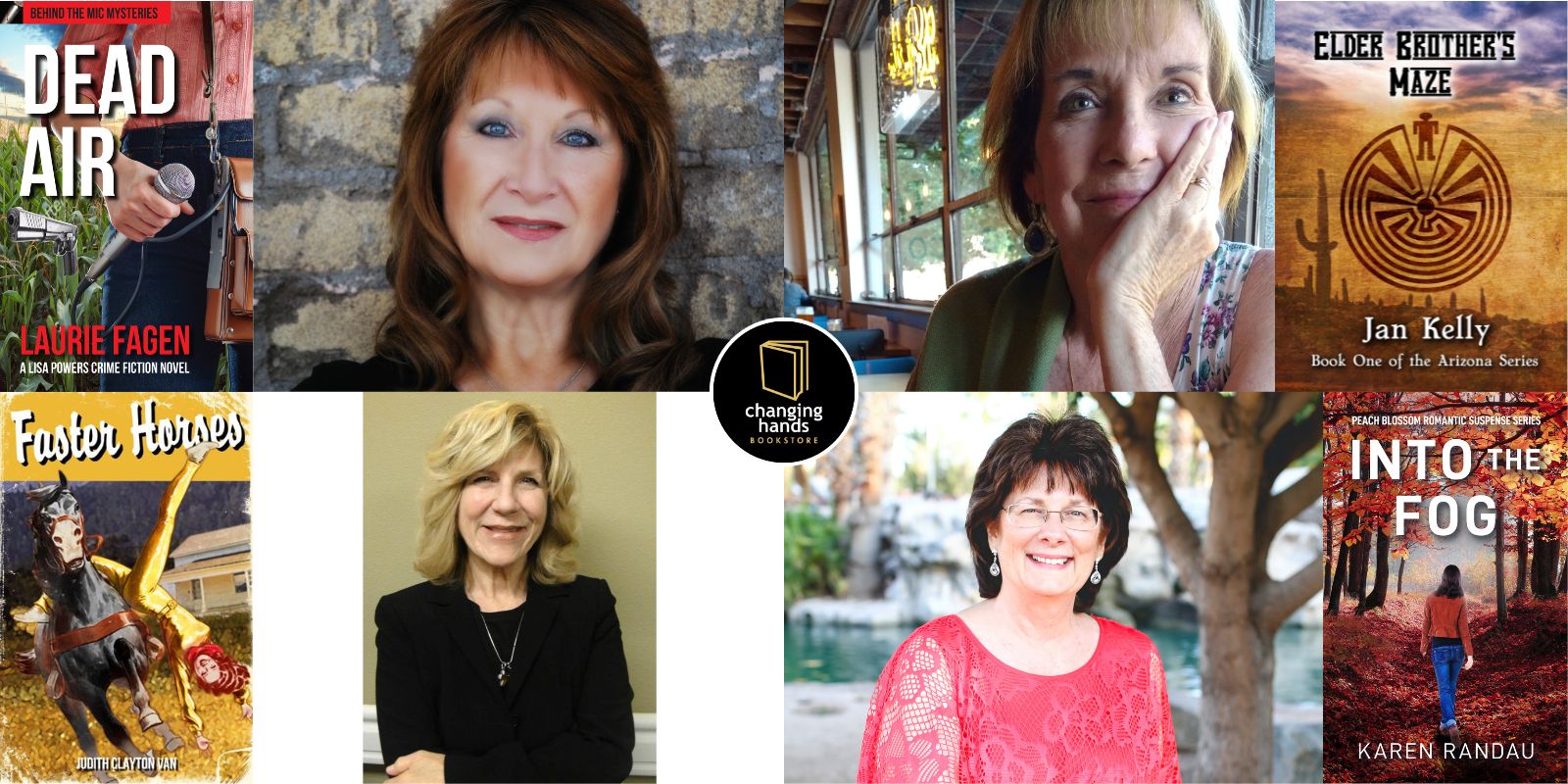 Dead Air by Laurie Fagen
Young radio crime reporter Lisa Powers covers a double cop shooting that tears apart the community, at the risk of her own emotional health. Her cold case is a 1999 sexual assault involving a child, and Lisa is determined to help the now 19-year-old victim move forward with her life. Lisa’s “podcast,” which she writes for fun at night after covering gritty crime stories during the day, is a film noir style story of a 1940s private eye and a dame. Only “L. N. Pane, P.I.” is the dame, and a gentleman seeks help finding who is out to kill him.

Elder Brother’s Maze by Jan Kelly
The ancient desert O’odham people’s creation stories parallel the path a young Guy Thornton takes to emerge from the “maze” he has made of his life. The novel opens in the center of the narrative as Guy, a down-on-his-luck Arabian horse trainer fresh out of prison, is getting drunk at the Wander On Inn. He spends the next several months living in the central Arizona desert with an elderly O’odham woman who seeks to teach him “tribe spirit,” while alternating chapters recount the past and his big break when the wealthy Frank Fielding hires him to tend to his champion Arabian mare. Unfortunately, Guy becomes entangled with Fielding’s wife, Lily, and her teenaged, mentally unstable sister, Rose, derailing his dreams of success and belonging through deceit and callous betrayal. Book One of The Arizona Series.

Faster Horses by Judith Clayton Van
Book One of the four book Oregon Series: Faster Horses (1948-1959) Coming of Age is the story of the Chapman Family as seen from the perspective of four-year-old Annie Butler who is raised by politically active grandparents on their Oregon horse ranch while her mother travels the country collecting boyfriends and World Championship belt buckles as a famous trick rider in professional rodeo. Annie's WWII Veteran father has disappeared to the east coast. Annie, on a quest for a father and her own home, battling her grandmother every step of the way, adventures across the Oregon countryside, falling in love with the farmhouse down the road and begging to live there, riding horses across the country in pursuit of risky adventure, finally causing her grandmother to send her to New York City where her mother is a star performer at the Madison Square Garden Rodeo of 1953. There, Annie loses her first love, meets her father and a cast of 1950’s sports figures, night club singers, Russian immigrants, dipsomaniacs, and hustlers that influence the rest of her life. On her return to Oregon a series of tragedies cause Annie to reevaluate all she has learned and intensify her search for a home. Teeming with faster horses, faster cars and faster women, this coming-of-age tale smashes the bounds of genre as it follows Annie’s wild ride across the Oregon countryside and beyond.

Into the Fog by Karen Randau
Marie Jessica "MJ" Goodrich hopes to find peace when she agrees to move from Phoenix to help her mother manage Peach Blossom Orchard in Oklahoma, but peace is scarce in this small town full of secrets. Josh Rivers has artistic desires, but he’s stuck running the failing auto shop he inherited. Bad life choices leave him believing he doesn’t deserve a second chance at love. When women close to them disappear, MJ and Josh set aside their insecurities to rescue the women before it’s too late. But will they become a lunatic’s next victims and miss the happily ever they finally admit they want? This is Book One of the Peach Blossom Romantic Suspense Series.

Laurie Fagen is a “writer by habit” who enjoyed a successful journalism career, starting in radio, moving to commercial and cable television and then publishing a 38,000 circulation community newspaper. A graduate of ASU in Radio & Television and now writing crime fiction mysteries, she has published three books in her Behind the Mic Mysteries, including Fade Out, Dead Air and Bleeder. She is currently in the final stages of a new book, Raw Image in Behind the Lens Mysteries.

Jan Kelly is a native Arizonan with an MFA in Creative Writing from Arizona State University where she taught for 30 years. She has one daughter and lives with her husband in Scottsdale, Arizona.

Judith Clayton Van grew up on a horse ranch in Oregon, granddaughter of a famous University of Oregon sports figure, daughter of 1954 World’s Champion Trick Rider, and cousin to the pioneers of the Pacific Northwest timber industry. She owned nightclubs, promoted concerts, studied at U of O, completed a BFA in Studio Art, and an MFA in Creative Writing at Arizona State University. At ASU for 23 years, she was an Instructor of English, Director of Harry Wood Gallery, Fiction Editor of Hayden’s Ferry Review, Art Editor for Superstition Review, and a juried literary artist with the Arizona Commission on the Arts.

Karen Randau has lived all over the southwestern U.S. but has called Arizona home for the past 40 years. She holds a degree in journalism from the University of Texas and enjoyed a long career in marketing communications, most of it directing the communications department in a Phoenix-based international nonprofit focused on poverty. She has 12 books published in three series, all mystery and suspense. She lives with her multi-generational family in the mountains of Arizona, where elk regularly feed on her rose bushes.