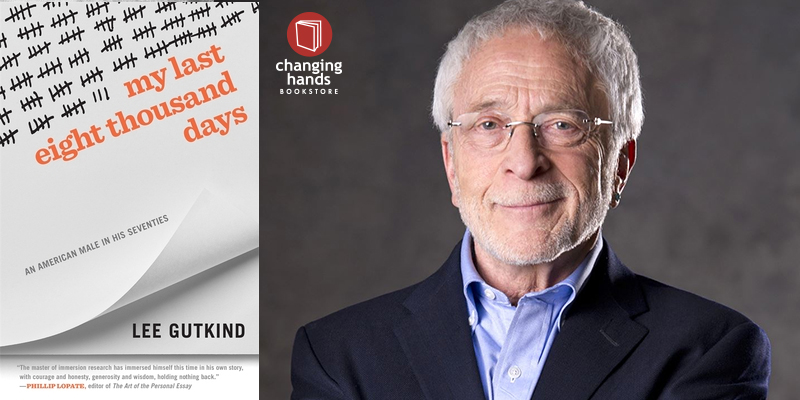 Lee Gutkind, whom Vanity Fair once called "the godfather behind creative nonfiction," presents his new book, My Last Eight Thousand Days: An American Male in His Seventies, in conversation with Steven Beschloss.

This revealing, candid, and vivid portrait of one man’s view of aging examines male aging in a way we’ve not seen before. Gutkind turns his notepad and tape recorder inward, taking his skills as an immersion journalist to perform a deep dive on himself. Here, he offers a memoir of his life as a journalist, editor, husband, father, recounting not only his many triumphs, but also exposing his missteps and challenges. The overarching concern which frames these brave, often confessional stories, is his obsession and fascination with aging: his resistance, his fears—how aging provoked anxieties and unearthed long-rooted tensions—and how he came to accept, even enjoy, his mental and physical decline. Gutkind documents the realities of aging with his characteristically blunt, melancholic wit and authenticity that drive the quiet force of all his work.

“Gutkind is the Godfather Behind Creative Nonfiction.” -Vanity Fair

Lee Gutkind is the author and editor of more than thirty books, including You Can’t Make This Stuff Up: The Complete Guide to Writing Creative Nonfiction–from Memoir to Literary Journalism and Everything in Between, Almost Human: Making Robots Think, The Best Seat in Baseball: But You Have to Stand, Forever Fat: Essays by the Godfather, and the award-winning, Many Sleepless Nights: The World of Organ Transplantation. Gutkind has appeared on many national radio and television shows, including The Daily Show with Jon Stewart, Good Morning America, and National Public Radio’s All Things Considered. He is a professor in the School for the Future of Innovation in Society at Arizona State University.

Steven Beschloss is a Senior Director for Narrative Development at Arizona State University, professor of practice at the Walter Cronkite School of Journalism and Mass Communication, director of ASU’s Narrative Storytelling Initiative and editor of Transformations, a new online magazine of personal essays and a publishing channel of the Los Angeles Review of Books. His articles and essays have been published by The New Yorker, The Washington Post, The New York Times, Smithsonian, The New Republic, Times Higher Ed, and many others. His most recent book is The Gunman and His Mother: Lee Harvey Oswald, Marguerite Oswald and the Making of an Assassin.