Mean Menu style requires jQuery library version 1.7 or higher, but you have opted to provide your own library. Please ensure you have the proper version of jQuery included. (note: this is not an error)
IN-PERSON AUTHOR EVENT
Lena Nguyen: We Have Always Been Here
7PM FRIDAY, OCTOBER 22 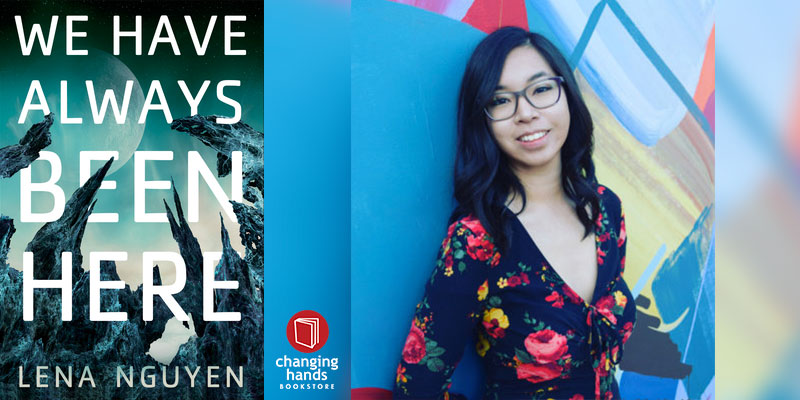 You can support Changing Hands by purchasing the book via Eventbrite below, or by contributing what you can. A suggested contribution of $5, $10, $15—whatever you can afford—will help keep our event series sustainable and accessible to all. Thank you!

This psychological sci-fi thriller from a debut author follows one doctor who must discover the source of her crew's madness... or risk succumbing to it herself.

Misanthropic psychologist Dr. Grace Park is placed on the Deucalion, a survey ship headed to an icy planet in an unexplored galaxy. Her purpose is to observe the thirteen human crew members aboard the ship—all specialists in their own fields—as they assess the colonization potential of the planet, Eos. But frictions develop as Park befriends the androids of the ship, preferring their company over the baffling complexity of humans, while the rest of the crew treats them with suspicion and even outright hostility.

Shortly after landing, the crew finds themselves trapped on the ship by a radiation storm, with no means of communication or escape until it passes—and that’s when things begin to fall apart. Park’s patients are falling prey to waking nightmares of helpless, tongueless insanity. The androids are behaving strangely. There are no windows aboard the ship. Paranoia is closing in, and soon Park is forced to confront the fact that nothing—neither her crew, nor their mission, nor the mysterious Eos itself—is as it seems.

ABOUT THE AUTHOR
The daughter of Vietnamese immigrants, Lena Nguyen lives with her partner in the alien desert of Arizona. She received her MFA in fiction from Cornell University, where she also taught courses in English, writing, and zombies. Her science fiction and fantasy have won several accolades, and she was a Writers of the Future finalist. When not writing, Lena enjoys editing and game development. We Have Always Been Here is her debut novel.