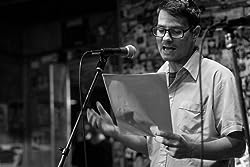 Creative writing instructor Sean Prentiss visits with his biography of Arizona's most famous environmental writer, Edward Abbey, and a travelogue of his search for a home for himself and Abbey's hidden desert grave.

Joining him poet Steve Coughlin, who presents his debut collection of poetry, a finalist for the FutureCycle Poetry Book Prize and an honest excavation of family memories.

Finding Abbey is a triple stranded narrative that includes a creative biography of Arizona's famous environmental writer, Ed Abbey, and a travelogue of Prentiss's search for the ghost of Abbey and his hidden desert grave, with a memoir of his larger search for a place called home. When the great environmental writer Edward Abbey died in 1989, four of his friends buried him secretly in a hidden grave. The final resting place of the Thoreau of the American West remains unknown and has become part of American folklore. In this book, Sean Prentiss goes hunting for Abbey’s grave and weaves together the story of Abbey’s life with the story of his own quest to discover where his own home lies.

Steve Coughlin’s first book of poetry, Another City, was a finalist for the FutureCycle Poetry Book Prize. His poems, essays, and stories have appeared in several notable magazines and literary journals, including the Gettysburg Review, Michigan Quarterly Review, Gulf Coast, Green Mountains Review, Seneca Review, New Ohio Review, and Slate. In the Summer 2013 issue of Pleiades, Coughlin was the featured emerging writer.

ABOUT THE AUTHOR
SEAN PRENTISS is also the co-editor of The Far Edges of the Fourth Genre: Explorations in Creative Nonfiction, a creative nonfiction craft anthology. And he is the co-author of the forthcoming environmental writing textbook, Environmental and Nature Writing: A Craft Guide and Anthology. He and his wife Sarah split their times between a small lake in northern Vermont and a hand-build cabin in the mountains of Colorado.

STEVE COUGHLIN was born and raised in a Boston suburb and received his M.F.A. from the University of Idaho and his Ph.D. from Ohio University. He now teaches writing and literature at Chadron State College in northwestern Nebraska.

Finding Abbey: The Search for Edward Abbey and His Hidden Desert Grave (Paperback)