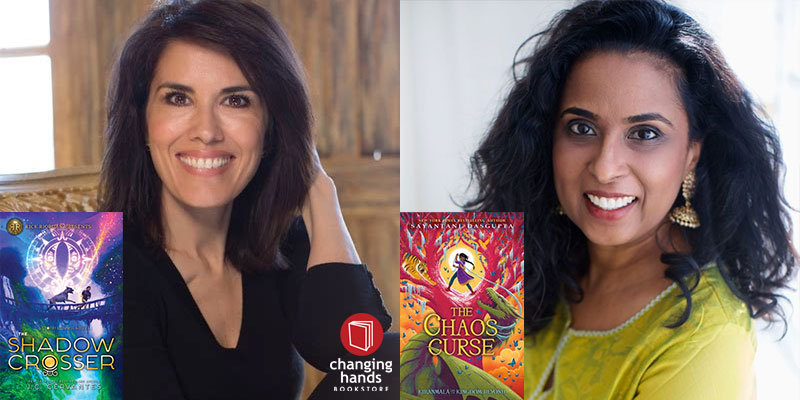 To attend this virtual event, we request a contribution of $5 or more, or the purchase of either authors' books via Eventbrite below. Your generosity helps us continue to present world-class literary events. We're glad you're here, and appreciate your support. You'll receive the Zoom link by email within 24 hours of the event's start time.*

Best-selling author J.C. Cervantes' shares her epic finale to the Storm Runner trilogy, a tale of mystery, magic, and mayhem featuring gods from both Maya and Aztec mythology. Joining her in conversation is the New York Times bestselling author of the Kiranmala and the Kingdom Beyond books, Sayantani DasGupta.

SHADOW CROSSER
Zane Obispo has been looking forward to his training at the Shaman Institute for Higher Order Magic, and not only because it means he'll be reunited with his best friend, Brooks. Anything would be better than how he has spent the last three months: searching for the remaining godborns with a nasty demon who can sniff them out (literally). But when Zane tracks down the last kid on his list, he's in for a surprise: the "one" is actually a pair of twins, and they're trying to prevent a mysterious object from falling into the wrong hands.

After a shocking betrayal, Zane finds himself at SHIHOM sooner than expected. Even more shocking is the news that the Maya gods have gone missing. The bat god, Camazotz, and Ixkik' (aka Blood Moon) have taken them out of commission . . . and the godborns are their next target. The only thing the villains need now? The object that the twins possess.

Zane knows the godborns aren't strong enough yet to stand up to Zotz, Ixkik', and their army. There might be a way to save the gods, but it involves locating a magical calendar that can see across time and space . . . not to mention traveling more than thirty years into the past.

In The Shadow Crosser, Zane and his friends embark on their most treacherous mission yet--a mission that, with one blunder, could change history as we know it, and worse, destroy the universe.


THE CHAOS CURSE
Kiranmala must leave the Kingdom Beyond and travel to her hometown of Parsippany to save Prince Lal, who has been spirited to the unlikeliest of places -- a tree in the yard of her best-enemy-for-life. She also faces evil serpents (of course!), plus a frightening prophecy about her role in the coming conflict between good and evil. Most troubling of all, though, is the way reality all around her seems to waver and flicker at odd moments. Could it be that the Anti-Chaos Committee's efforts are causing a dangerous disruption in the multiverse?

Kiran must grapple with the increasingly tangled threads that threaten to ensnare her...and everyone in the world and the Kingdom Beyond.


*Our Zoom events are password-protected with wait rooms enabled. The password is entered automatically by clicking the event link when logged in to a Zoom account. We'll admit guests shortly before 6pm and throughout the event. If you join late, please be patient—we'll admit you when we see you.

ABOUT THE AUTHORS
J. C. Cervantes (www.jennifercervantes.com) is the New York Times best-selling author of The Storm Runner and The Fire Keeper, the first two books in a fantasy adventure trilogy based on Maya mythology. Her first novel, Tortilla Sun, was a 2010 New Voices pick by the American Booksellers Association and was named to Bank Street's 2011 Best Book List. Jen grew up in San Diego and was fascinated by stories about Maya gods and magic. Follow her on Facebook, Twitter (@jencerv), and Instagram (authorjcervantes).

Sayantani DasGupta is the New York Times bestselling author of the critically acclaimed, Bengali folktale and string theory-inspired Kiranmala and the Kingdom Beyond books, the first of which -- The Serpent's Secret -- was a Bank Street Best Book of the Year, a Booklist Best Middle Grade Novel of the 21st Century, and an E. B. White Read Aloud Honor Book. Sayantani is a pediatrician by training, but now teaches at Columbia University. When she's not writing or reading, Sayantani spends time watching cooking shows with her trilingual children and protecting her black Labrador retriever Khushi from the many things that scare him, including plastic bags. She is a team member of We Need Diverse Books, and can be found online at sayantanidasgupta.com and on Twitter at @sayantani16.