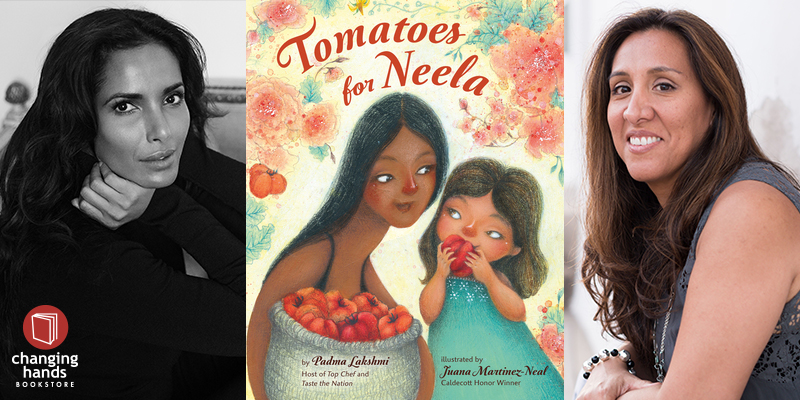 Join us for a virtual event with New York Times bestselling author, television host, and producer, Padma Lakshmi to celebrate the release of her debut picture book, Tomatoes for Neela, with Caldecott-Honor-winning illustrator, Juana Martinez-Neal. Lakshmi and Martinez-Neal will be joined in conversation by award-winning journalist and talk show host Tamron Hall. 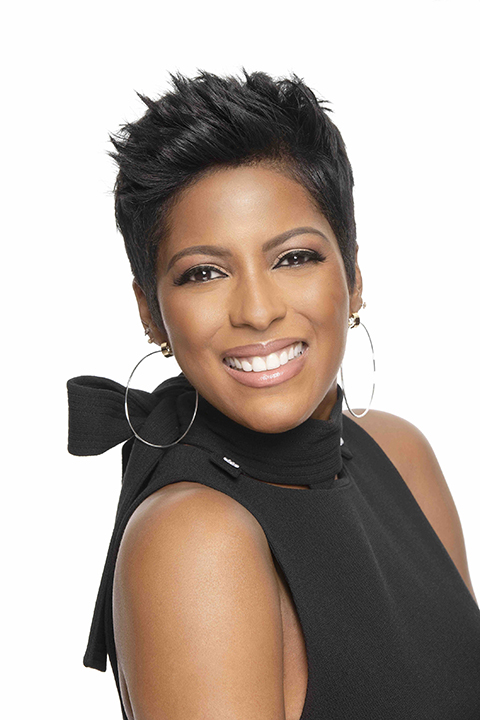 In Conversation with
Tamron Hall

BONUS! Purchase a copy of Tomatoes for Neela with your registration from Changing Hands to receive an exclusive pre-recorded cooking demonstration from Padma Lakshmi (for attendees only), plus a signed bookplate signed by Padma Lakshmi and Juana Martinez-Neal.

Neela loves cooking with her amma and writing down the recipes in her notebook. It makes her feel closer to her paati who lives far away in India. On Saturdays, Neela and Amma go to the green market and today they are buying tomatoes to make Paati's famous sauce. But first, Neela needs to learn about all the different kinds of tomatoes they can pick from. And as Neela and Amma cook together, they find a way for Paati to share in both the love and the flavors of the day.

Padma Lakshmi takes young readers on an intergenerational journey full of delicious flavors and fun food facts that celebrates a family's treasured recipes. And Caldecott Honor-winning illustrator Juana Martinez-Neal brings this circle of women to life with vivid detail and warmth. Tomatoes for Neela lovingly affirms how we can connect to other cultures, as well as to our own, through food.

ABOUT THE AUTHOR
Padma Lakshmi is the creator and host of Hulu's Taste the Nation and host and executive producer of the Emmy-winning Bravo series Top Chef. She is the bestselling author of two cookbooks, the Encyclopedia of Spices and Herbs, as well as her memoir Love, Loss, and What We Ate. Lakshmi is also cofounder of the Endometriosis Foundation of America, an artist ambassador for the ACLU, and a Goodwill Ambassador for the United Nations. She lives in New York City with her daughter. Her favorite kind of tomato is a San Marzano.

ABOUT THE ILLUSTRATOR
Juana Martinez-Neal is the Peruvian born daughter and granddaughter of painters. Her debut as an author-illustrator Alma and How She Got Her Name, was awarded a Caldecott Honor and was also published in a Spanish edition as Alma y cómo obtuvo su nombre. Her second author-illustrator book, Zonia's Rain Forest and La selva de Zonia released in spring 2021. She has also illustrated numerous picture books including La Princesa and the Pea by Susan Middleton Elya, for which she won the Pura Belpré Illustrator Award, and Fry Bread: A Native American Family Story by Kevin Noble Maillard, which won The Robert F. Sibert Medal. Juana lives in Connecticut with her family. Visit her online at https://juanamartinezneal.com

ABOUT THE MODERATOR
Tamron Hall is an award-winning TV host, journalist and philanthropist. Currently, Tamron is the host and executive producer of the television show “Tamron Hall,” in which she won a Daytime Emmy for Outstanding Informative Talk Show Host” and the prestigious Gracie Award in its first season, which recognizes exemplary programming created by women. Tamron spent 10 years at WFLD in Chicago, where she served as an anchor, general assignment reporter, consumer reporter and host of the three-hour “Fox News in the Morning” program. While there, she secured a one-on-one interview with then Senator Barack Obama shortly before he announced his presidential run.

Tamron was the first African American female co-host of “TODAY” and served as the anchor for “MSNBC Live with Tamron Hall.” Since 2013, Tamron has hosted “Deadline: Crime with Tamron Hall” on Investigation Discovery, taking an in-depth look at crimes that shocked the nation.

Tamron is passionate about many causes, including domestic violence, homelessness and literacy – dedicating her time to many deserving organizations over the years. She is an ambassador for Safe Horizon, a domestic abuse organization which also honored her with their Voice of Empowerment Award in 2014. She’s partnered with Safe Horizon previously to launch The Tamron

Renate Fund in honor of her sister to help victims and families affected by domestic violence. Day One, a New York-based advocacy group for victims of domestic violence, honored her work, and she received the Ackerman Family Advocate Award for her efforts to raise awareness for families who have a loved one experiencing abuse.