It's back! First Fiction returns to Changing Hands Bookstore, now at our own First Draft Book Bar.

Three first-time fiction writers read excerpts from their buzz-worthy novels while YOU enjoy happy hour prices at the bar. Afterwards, we'll open the floor to questions, then enjoy an informal mixer with the authors, who will meet attendees, take photos, and sign their books.

FREE EVENT / VIP OPTIONS
The event is free, but you can also select from two VIP options, both of which entitle you to a pre-event mixer with the authors, all three books, an exclusive First Fiction tote, a free drink from our First Draft Book Bar, and complimentary light refreshments. 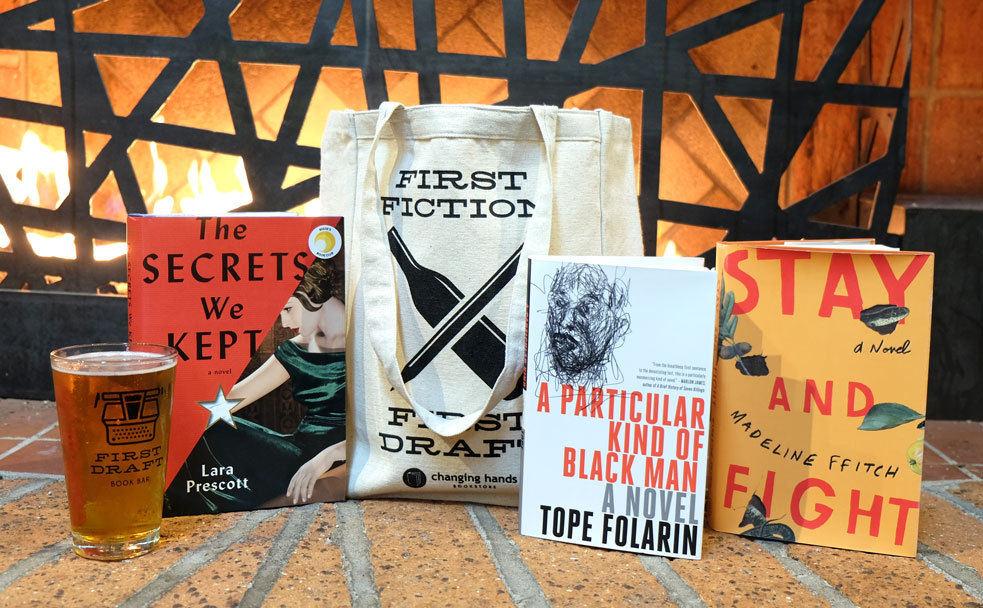 The EXCLUSIVE pre-event Meet-and-Greet (with the purchase of a VIP Package) takes place from 6-7-pm.

The Secrets We Kept by Lara Prescott

A HELLO SUNSHINE x REESE WITHERSPOON BOOK CLUB PICK. A thrilling tale of secretaries turned spies, of love and duty, and of sacrifice--inspired by the true story of the CIA plot to infiltrate the hearts and minds of Soviet Russia, not with propaganda, but with the greatest love story of the twentieth century: Doctor Zhivago.

At the height of the Cold War, two secretaries are pulled out of the typing pool at the CIA and given the assignment of a lifetime. Their mission: to smuggle Doctor Zhivago out of the USSR, where no one dare publish it, and help Pasternak's magnum opus make its way into print around the world. Glamorous and sophisticated Sally Forrester is a seasoned spy who has honed her gift for deceit all over the world--using her magnetism and charm to pry secrets out of powerful men. Irina is a complete novice, and under Sally's tutelage quickly learns how to blend in, make drops, and invisibly ferry classified documents.

The Secrets We Kept combines a legendary literary love story--the decades-long affair between Pasternak and his mistress and muse, Olga Ivinskaya, who was sent to the Gulag and inspired Zhivago's heroine, Lara--with a narrative about two women empowered to lead lives of extraordinary intrigue and risk. From Pasternak's country estate outside Moscow to the brutalities of the Gulag, from Washington, D.C. to Paris and Milan, The Secrets We Kept captures a watershed moment in the history of literature--told with soaring emotional intensity and captivating historical detail. And at the center of this unforgettable debut is the powerful belief that a piece of art can change the world.


Stay and Fight by Madeline ffitch

"Like Bastard Out of Carolina, ffitch's electrifying debut novel is a paean to independence and a protest against the materialism of our age." —O: The Oprah Magazine


Helen arrives in Appalachian Ohio full of love and her boyfriend’s ideas for living off the land. Too soon, with winter coming, he calls it quits. Helped by Rudy—her government-questioning, wisdom-spouting, seasonal-affective-disordered boss—and a neighbor couple, Helen makes it to spring. Those neighbors, Karen and Lily, are awaiting the arrival of their first child, a boy, which means their time at the Women’s Land Trust must end.

So Helen invites the new family to throw in with her—they’ll split the work and the food, build a house, and make a life that sustains them, if barely, for years. Then young Perley decides he wants to go to school. And Rudy sets up a fruit-tree nursery on the pipeline easement edging their land. The outside world is brought clamoring into their makeshift family.

Set in a region known for its independent spirit, Stay and Fight shakes up what it means to be a family, to live well, to make peace with nature and make deals with the system. It is a protest novel that challenges our notions of effective action. It is a family novel that refuses to limit the term. And it is a marvel of storytelling that both breaks with tradition and celebrates it. Best of all, it is full of flawed, cantankerous, flesh-and-blood characters who remind us that conflict isn't the end of love, but the real beginning.

Absorbingly spun, perfectly voiced, and disruptively political, Madeline ffitch's Stay and Fight forces us to reimagine an Appalachia—and an America—we think we know. And it takes us, laughing and fighting, into a new understanding of what it means to love and to be free.


A Particular Kind of Black Man by Tope Folarin

A stunning debut novel, from Rhodes Scholar and winner of the Caine Prize for African Writing, Tope Folarin about a Nigerian family living in Utah and their uncomfortable assimilation to American life.

Living in small-town Utah has always been an uneasy fit for Tunde Akinola’s family, especially for his Nigeria-born parents. Though Tunde speaks English with a Midwestern accent, he can’t escape the children who rub his skin and ask why the black won’t come off. As he struggles to fit in and find his place in the world, he finds little solace from his parents who are grappling with their own issues.

Tunde’s father, ever the optimist, works tirelessly chasing his American dream while his wife, lonely in Utah without family and friends, sinks deeper into schizophrenia. Then one otherwise-ordinary morning, Tunde’s mother wakes him with a hug, bundles him and his baby brother into the car, and takes them away from the only home they’ve ever known.

But running away doesn’t bring her, or her children, any relief from the demons that plague her; once Tunde’s father tracks them down, she flees to Nigeria, and Tunde never feels at home again. He spends the rest of his childhood and young adulthood searching for connection—to the wary stepmother and stepbrothers he gains when his father remarries; to the Utah residents who mock his father’s accent; to evangelical religion; to his Texas middle school’s crowd of African-Americans; to the fraternity brothers of his historically black college. In so doing, he discovers something that sends him on a journey away from everything he has known.

Sweeping, stirring, and perspective-shifting, A Particular Kind of Black Man is a beautiful and poignant exploration of the meaning of memory, manhood, home, and identity as seen through the eyes of a first-generation Nigerian-American.

Lara Prescott received her MFA from the Michener Center for Writers at the University of Texas, Austin. She was previously an animal protection advocate and a political campaign operative. Her stories have appeared in The Southern Review, The Hudson Review, Crazyhorse, Day One, and Tin House Flash Fridays. She won the 2016 Crazyhorse Fiction Prize for the first chapter of The Secrets We Kept. She lives in Austin, Texas.

Madeline ffitch cofounded the punk theater company Missoula Oblongata and is part of the direct-action collective Appalachia Resist! Her writing has appeared in Tin House, Guernica, Granta, VICE, and Electric Literature, among other publications. She is the author of the story collection Valparaiso, Round the Horn.

Tope Folarin is a Nigerian-American writer based in Washington, DC. He won the Caine Prize for African Writing in 2013 and was shortlisted once again in 2016. He was also recently named to the Africa39 list of the most promising African writers under 40. He was educated at Morehouse College and the University of Oxford, where he earned two Masters degrees as a Rhodes Scholar. He is the author of A Particular Kind of Black Man.
Powered by Eventbrite
My Account • Sign In • Sign Out • Register
NEW & USED BOOKS
AUTHOR EVENTS • GIFTS Changing Hands Tempe
6428 S McClintock Dr, Tempe, AZ 85283
480.730.0205 [Google Map]
Sun: Closed
Mon-Sat: 11am-6pm
Changing Hands Phoenix
300 W Camelback Rd, Phoenix, AZ 85013
602.274.0067 [Google Map]
Sun: Closed
Mon-Sat: 11am-6pm