Mean Menu style requires jQuery library version 1.7 or higher, but you have opted to provide your own library. Please ensure you have the proper version of jQuery included. (note: this is not an error)
Changing Hands is Arizona's leading independent bookstore, offering new and used books, unique gifts, toys, and more than 300 author events every year. In Tempe since 1974 (currently at 6428 South McClintock Drive), Changing Hands opened a second location in 2014 at The Newton, an innovative adaptive reuse project that re-purposed the iconic Beef Eaters restaurant in central Phoenix. This second location (at 300 West Camelback Road) is home to Changing Hands' own First Draft Book Bar, one of a small handful "book bars" in the U.S. that serve wine, beer, and coffee drinks in addition to book and event offerings.
To keep up with all things Changing Hands, visit changinghands.com, like us on Facebook, or follow on Instagram @changinghands or Twitter @changinghands. 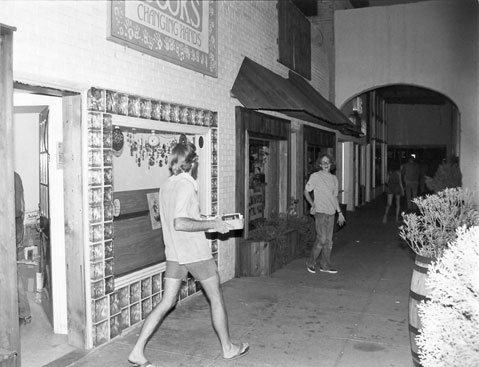 Changing Hands began in 1971 as a fantasy in conversations. Tom Broderson, Gayle Shanks, and Bob Sommer, all volunteers at an alternative school in Phoenix, found that they shared a common vision of working at a bookstore—a socially responsible, environmentally sound business that would also be a community gathering place. A few years later their fantasy became a reality when Tom bought a small, struggling used bookstore for $500, which included books, bookcases, and an ancient cash register. Since that store was losing its lease, the books were packed up until a new location could be found.

Tom and Gayle opened Changing Hands on April Fool’s Day, 1974, with a little borrowed money and a large interest in books and community service. Bob served as a part-time consultant for the first year, after which he came aboard full-time. The group had an eye toward self-sufficiency titles and books not readily available at Walden’s and B. Daltons, the chain bookstores of the day. Over the first few years they learned the business by trial and error, with keen attention to suggestions made by customers who soon became friends. Some also became co-workers at the store, which was originally set up as a worker-owned collective. All employees were owners and decisions were made by consensus.

As the business expanded, the store outgrew its original 500 square feet on 5th Street in downtown Tempe. In August of 1978—with the help of a human book brigade of customers and friends—they moved to a nearby location on Mill Avenue, with 1700 square feet of selling space on two levels. The owners acquired an adjoining shop to the south a few years later, and ended up with books on three levels. Later still, they broke through the north wall for another addition, and the store became a roomy 5000 square feet.

The worker-owned collective evolved too. As the business grew, making decisions with a large group of people became complex and unwieldy. As some of the owners moved on to other pursuits, the group was reduced to a core group of owners. They started hiring workers as employees and have maintained their commitment to fairness and inclusion with all the entire staff,  recognizing that they make up the basis of good customer service. The current owners of Changing Hands are Gayle Shanks, Bob Sommer, and Cindy Dach.

Community involvement in the early days of Changing Hands included Community Music Nights and the Friday Poetry Readings which still continue today. Over the decades, author events, workshops and classes have become integral parts of the Changing Hands experience. They  now host some 400 events every year—from storytime events for the kids to appearances by local authors and countless New York Times bestselling novelists, celebrities, rock stars, politicians, sports figures, and more. Children’s books and events are a vital component as well.  The owners know children are the future of Changing Hands and the community. Some of our kids-oriented offerings include costume events, Club Read, weekly storytimes, and visits by favorite authors.

Our Move from Mill Avenue

In the mid ’90s, when downtown Tempe development began to head away from the needs of the local community, with rent and parking fees skyrocketing as national chains moved in, Changing Hands was forced to make the painful decision to relocate—a huge undertaking, unlike anything the owners had encountered before. But once again—this time in the spring of 1998—they had the support and help of their large community the readers they’d served for years. After moving to their current Tempe location on McClintock and Guadalupe, they found many new friends and neighbors who welcomed them warmly. After taking on 18 new employees at once, it truly felt as if the store had been reborn. Two years later, in 2000, the Mill Avenue location closed forever when its lease expired.